A Fly In The Ointment 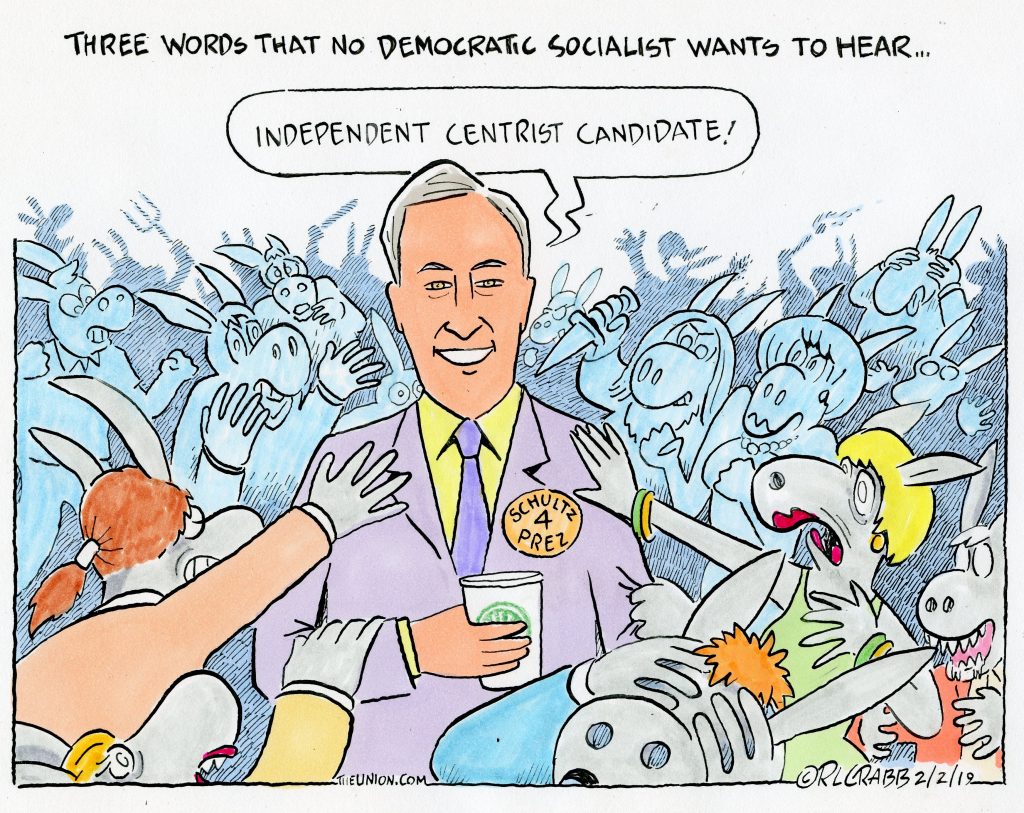 Regular readers know that I have complained about the two-party duopoly since I started doing this Village Idiot gig. I rarely vote for either when electin’ time comes around, and only halfheartedly cast my lot with third parties, cartoon characters, or whatever other choices there were before we got stuck with top two.

This week I finally saw someone who seems to be closer to my guiding ethos; someone who is mostly liberal but pragmatically conservative when it comes to balancing a budget. Some who asked the same questions I’ve been asking for years.

Howard Schultz is an unlikely candidate; a self-made billionaire who pioneered the corporate coffee shop back in the nineties. His employees get generous benefits and can even buy into the company. He claims he wanted to give his workers the dignity that was denied to his father, a condition that led the elder Schultz to abuse his family.

He’s not real popular in his hometown Seattle, where he was instrumental in forcing many mom and pop caffeine pushers out of business. They also blame him for the loss of the Seattle Supersonics basketball franchise.

Democrats and the media have gone into a frenzy of hate and rage after he disavowed the party and said he would run as an independent, but had he joined the caravan of candidates vying for the 2020 nomination, it seems likely that no one would have paid attention.

He certainly has their attention now. Finally, there is someone who wants to know just how the government will enact single payer healthcare, free college, free daycare, guaranteed jobs with benefits, subsidized affordable housing, a solution to homelessness and a Marshall Plan to put the fossil fuel industry out of business in ten years or less.

All of these things are worthy goals, and the stock answer is to gut the rich. Details and numbers are in short supply. Another potential candidate, former New York mayor Michael Bloomberg, echoed Schultz’s skepticism. Could it be that these horrible billionaires who know what it’s like to balance a budget actually understand the math involved?

The Trumpublican solution is just ignore the details and goose the economy to unprecedented levels, hoping that the massive revenue loss caused by the tax cuts will be made up by the increase in wealth creation. So far, that idea hasn’t made a dent in the $21 trillion national debt. It’s the ticking time bomb that neither side wants to talk about.

And it becomes more apparent every day that The Donald has lost his marbles. Just this week he’s disavowed his own national security experts when they tell him what he doesn’t want to hear. The President of the United States has become the Queen of Denial.

But Howard Schultz will never be president. His personality and governing philosophy are as ill-suited to the office as Trump’s, but in the other direction. There is no one currently considering a third party run that would garner enough support to upend the status quo. I expect he will be gone by summer, once he gets ravaged on his book tour.

The Democrats know this, and believe that Trump is so unpopular that they can promise the moon and stars and finally establish the progressive agenda they’ve dreamed of for decades. When everyone is working for or dependent on government, everyone will vote for government.

The Republicans will run on the promise of capitalism, and the fear of socialism, communism, and the potential loss of personal freedoms. It will be ugly.

So I hope Schultz’s quixotic run may cause the Democrats to modify their platform once it becomes apparent that a far left agenda might be their undoing. Show me (and the voters) how you plan to accomplish your goals without wrecking an already fragile economy and fragmenting the nation even more than it is today.

That’s all I’ve ever asked.

6 Responses to A Fly In The Ointment