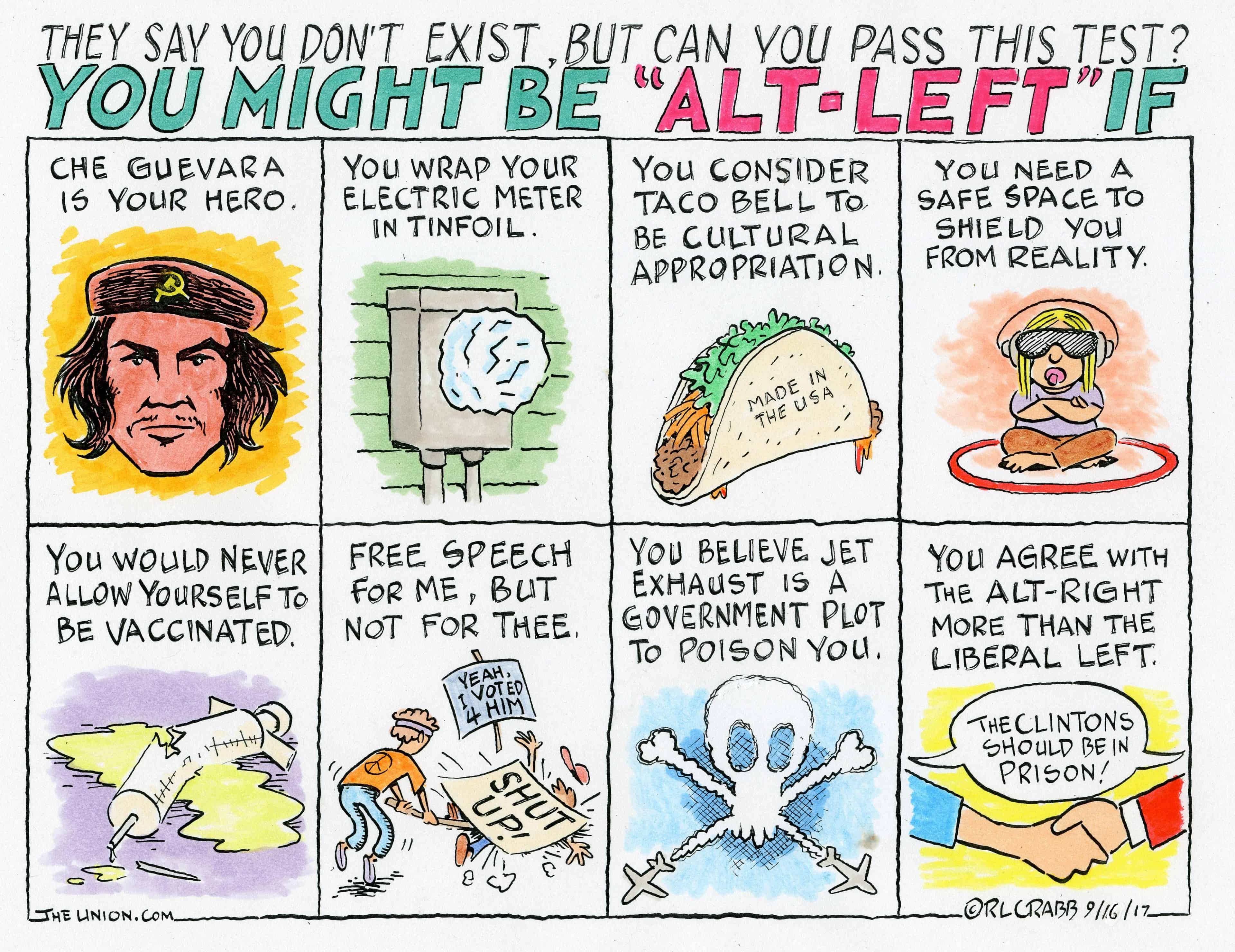 In the past month I have been chastised repeatedly for using the term “alt-left” to describe a faction of the liberal/progressive ideology that (to me, anyway) is not in line with what I consider “mainstream” Democrats. They may not be a majority, but there are quite a few of them around my neck of the woods.

I devised this crude test so you can see for yourself whether you are out on the fringes of the left, or perhaps we will learn that the alt-left is isn’t so far from the mainstream after all.

First, we’ll explore the fascination with communism.  When I was growing up in the sixties there were many Marxist apologists and outright supporters on the campuses and in the city streets. Maybe it was a natural backlash brought on by the harsh treatment of leftists during the McCarthy years.  There was definitely a generational rebellion against the notion that we boomers were expected to blindly salute the flag and march into a steaming jungle to fight people who had never done us any harm, no matter what they called themselves.

Because of the wide spectrum of humanity exposed by social media, I’ve been seeing a lot more sympathy and outright support for the sickle and hammer. Today’s Marxist believes that modern communism will be a benign force for equality and freedom, kind of like Star Trek.  There are some who believe Stalin and Mao were victims of fake news, a belief that was so popular in the late forties that it inspired Orwell to write Animal Farm to debunk such notions.

Next, the science test. The alt-left believes that climate change is settled science, but when it comes to vaccinations, chem-trails and microwaves, the establishment is the perpetrator of outright lies, funded by corporate interests. There are certainly enough real cases of corporate cover ups and malfeasance to warrant a healthy skepticism of big business and shadow governments. It’s poisoned the well for many, which is a shame. The progress made by corporate research and independent innovation in the last century has improved the lives of millions worldwide.

There is growing support among the left for limiting free speech, especially in light of the resurgence of white supremacists and fascism. It’s difficult to support any rights for these scumbags, but once again one has to look back to the excesses of the McCarthy era to see that censorship of unpopular speech can go both ways, and always for the worse. As Salman Rushdie noted: “Freedom of expression. Without the ability to offend, it ceases to exist.”

The urge to meet fascism with fists and clubs is already covered by the Antifa, or anti-fascists, another leftist sub-sect. Most Democrats are desperately trying to distance themselves from this anarchist wing of the movement, so as not to be seen as embracing violent revolution, a real downer when you’re trying to win elections.

Another no-no is the sin of “borrowing” from other cultures. If you are inspired to lift anything from a recipe to an art style to fashion, you are guilty of  profiting from the  traditions and creativity of the developing world. I’m not saying a person should not acknowledge their inspiration and sources, or that one should directly steal from others, but in the global melting pot we all profit from shared ideas. Otherwise, in the name of fairness, third worlders should stop wearing Levis and eating hot dogs.

Finally, there are the purists who will never give an inch in their cultural revolution. In that, they are as stubborn as the staunchest Trump voter. It’s all or nothing and it is their duty to drown out those voices of moderation. Winning is the only option. The opposition must be crushed. Period.

So there you have it. Is there an alt-left, and if there is, how ingrained is it with liberal ideology? Is it becoming acceptable enough to win elections? In some cases it already has, but only in deep blue districts.

For me, it’s just more evidence of the psychosis infecting both parties. If I’m to be vilified for having the rational thought that there is room for compromise in a real democracy, I welcome it. Us moderates can be stubborn too.