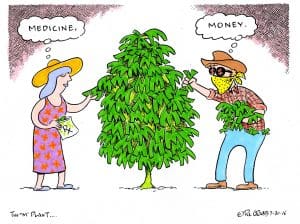 Some people have the idea that legalizing recreational marijuana will eliminate the criminal aspect of the pot business. Unfortunately, it is becoming apparent that there will still be a thriving black market, at least until prices crash to a level that makes it unprofitable.

Even so, there will be those who do not wish to pay any price when they can easily pick off the fruits of someone else’s labor.

The new reality is beginning to dawn on residents of rural counties. One poster on Facebook lamented the loss of silence in her country home, where the night air is filled with the hum of generators. Another noted that the foothills look as if they were covered with glow worms when the proliferation of greenhouses are viewed from the air.

It’s doubtful that the “green rush” will last. Those with money will force most of the wildcats out of business, except for a few who cater to a high end niche market.

Still, it will be chaotic for some years to come. You have to be careful what you wish for.