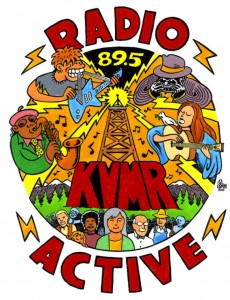 Sitting through an NC planning session can be somewhat like being waterboarded. The City’s stringent requirements for removing an existing structure usually brings out a crowd, but most were in agreement that the new building will be an asset to downtown, and keep the station in the city limits. The hearing lasted for a good three hours, with commissioners examining every excruiating detail with a fine tooth comb. It never ceases to amaze me how they can split a single hair into enough strands to make a toupee for Don Trump. Still, it’s that attention that has made Nevada City unique among the many foothill towns.

There were some concerns from citizens. Some were uncomfortable with the radio tower/sign design, feeling that it deviated too much from the city’s sign limits. One resident was concerned about radiation from radio signals. (Note the lightning bolts in my illustration, which was commissioned for a thank you card for donators to the recent pledge drive.) The station’s engineer explained that there would only be a low-power narrow UHF signal that would eliminate the need for tinfoil headwear. There were a few other issues with aesthetics and parking, but in the end there was unanimous consent to move forward.

This project is a real shot in the arm for Nevada City, and will mutually benefit the Nevada Theatre with upgrades to the backstage area. A definite win-win for all.