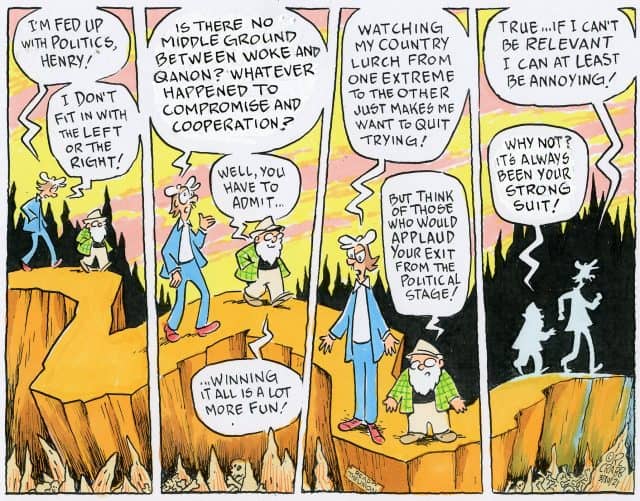 I get a fair amount of shit for my opinions on politics. It’s a good thing to stand in the middle of the road when you’re in this business, even if you have to dodge the steamrollers that try to run you down or push you to one side or the other.

And I can hear both of them cursing and flipping me off as they pass me in their little game of chicken, seeing how far they can push each other before swerving into the ditch. Egos so bloated with self-importance that they willingly risk blowing the country to smithereens to prove how god damned righteous they are.

These last four years have been the worst, and have driven me close to the edge. I’m especially pissed off at Republicans, because they chose a flaming asshole so utterly vile that it forced me into voting Democrat in 2020, a party I gave up on twenty years ago.

That’s not to say I’ve given up on being on the liberal side of the road a good part of the time. The vast majority of my friends are Democrats, or at least center-left independents like me. It’s mostly the new generation of so-called “progressives” that I want no part of. The ones who would cancel you when your ideology doesn’t strictly follow their cultural revolution guidelines. The ones who think you should only see and hear their version of truth.

And the ones who may feel the same as I do but won’t speak up for fear of alienating a segment of voters they need to keep their tenuous grip on power. You’re the ones who will end up on the chopping block in the end. Just ask Robespierre.

This week I’ve been called a bitter old man by one side and a goon by the other. Go ahead, do your worst. It only inspires me to keep pushing pins in the voodoo dolls I keep on the shelf above my drawing board.

Like Loading...
This entry was posted in Cartoonist Under Fire, Culture, Inept vs. Insane, Politics. Bookmark the permalink.

10 Responses to Looking For Mr. Goodnation