(Author’s Note: In light of current divisions in the American body politic, I have devised this proposed amendment to the U.S. Constitution in an attempt to streamline the electoral process of choosing a working government.)

Section I. – The position of Independent Counsel shall be automatically enabled upon the election of the President and Vice President, to be appointed by the party out of power. The Counsel will have the power to subpoena  any witness it deems relevant to the investigation of the incoming administration, dating back to preschool. The Counsel will be authorized to pay the sum of $10,000 to witnesses, whether their testimony is corroborated by evidence or not.

Section II. – Should the President be impeached and removed from office, a new Independent Counsel will be appointed by the party out of power to begin an investigation of the incoming President. The same rules articulated in section one will apply to the new Counsel.

Section III. – Should the incoming President be impeached and removed from office, a special election will be held to choose a new President and Vice President, but the Legislatures of the several states may nullify the election results if the outcome is still disputed after no less than six recounts.

Section IV. – If the election cannot be certified, it shall be determined that irreconcilable differences exist between the parties. The authority to govern will revert to the several states. In the case of disputes to the authority of the state governments, the courts will be authorized to set new boundaries county by county. If the authority of the courts is disputed, governance will be administered by whatever group of citizens is able to muster enough support to seize power. (See 2nd Amendment)

Section V. – At that point the Constitution of the United States will be rendered null and void. This noble experiment in democracy will enter the history books and hopefully serve as a lesson to future generations.

Maybe next time they’ll get it right. 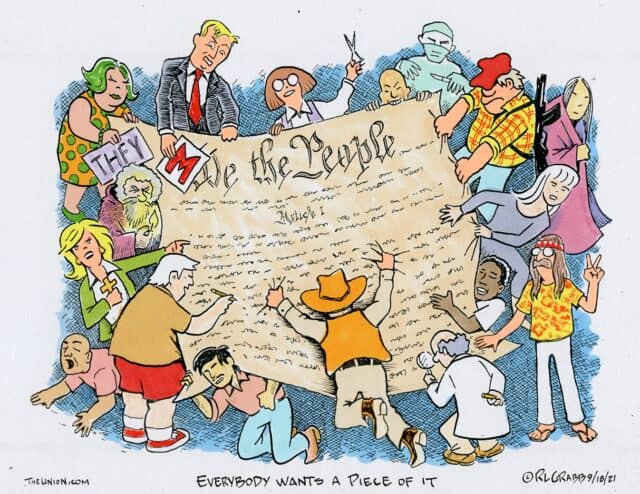