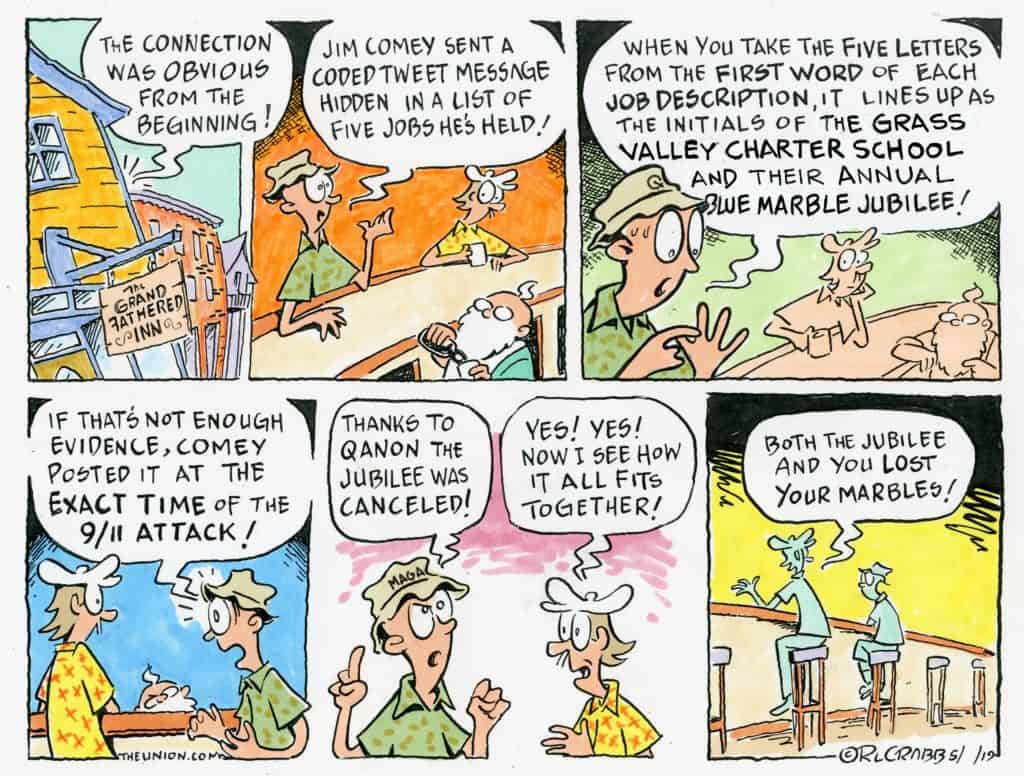 My old friend Chris Peterson once told me that the wind doesn’t blow in Nevada County, it sucks. And this last week sucked mightily, thanks to the efforts of the conspiracy-inclined followers of QAnon. Nevada County seems to attract elements from both extremes, but this time we managed to go viral with a story that originated from the dark recesses of the righteous right resistance.

Interesting that our local far right blogs have been silent on the subject. Over at Rebane’s, all the talk is centered around the usual suspects: the disloyal press, left wing mental illness, Ragheads under the bed, The Donald’s brilliant foreign policies, Dr. Seuss died for our sins, and of course, “lock her up!” It’s as if they somehow missed a local political event that has captured headlines the world over.

You’d think our MAGA boys would be congratulating themselves on how the alert Forces Of Good saved the the clueless Grass Valley Charter School from Jihad Jim Comey and his Taliband of Terror. Somewhere, in a concrete-reinforced bunker (also known as mom’s basement), a True Believer saw the message  from “Q” (alias Trump) in the bowl of alphabet soup he was having for lunch. This unheralded patriot then googled the letters, saw that they corresponded to our little school, and immediately called in the troops.

Certainly, that person deserves the Medal of Freedom and a Big Mac, should his or her identity ever be revealed.

But it would be out of character for that crowd to brag about their victories. As former redneck resident Dick Marshall used to say, “Real greatness doesn’t need a legacy.”