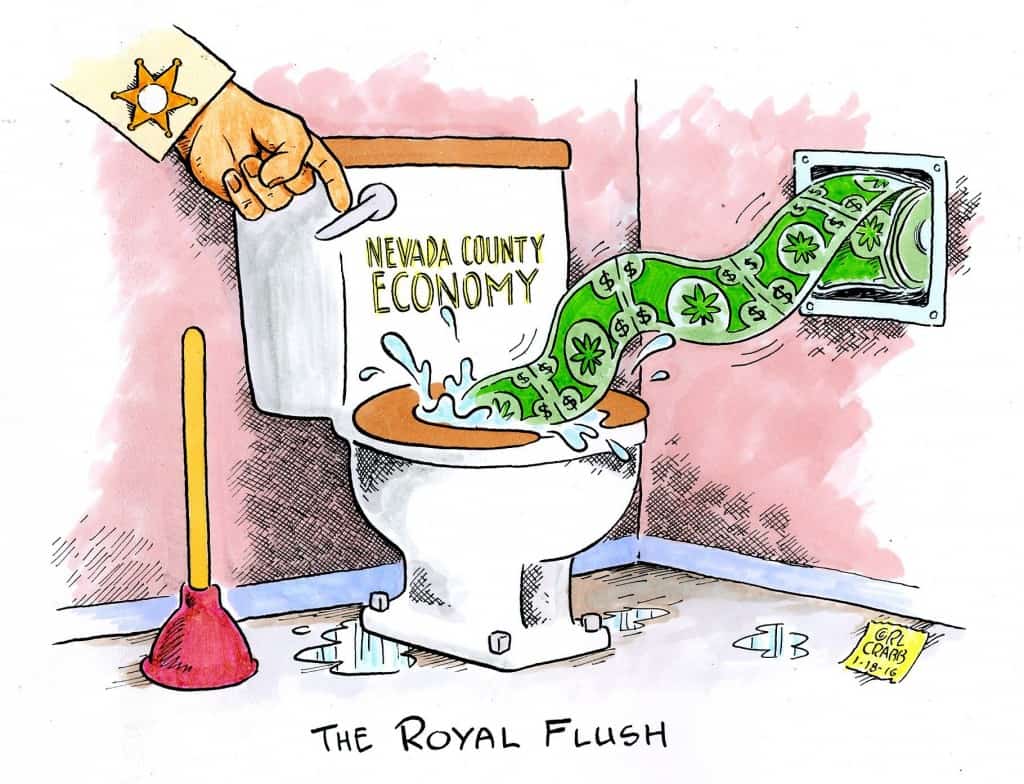 There’s been a lot of chatter on social media since Sheriff Keith Royal and the Board of Stuporvisors railroaded a draconian approach to the invasive marijuana culture onto the June ballot. Hundreds of amateur pharmacists have seen their livelihood threatened, just when it looked like the magic herb was going to finally be totally legalized in California.

So what is the reasoning behind this surprise attack? It’s no secret that the misnamed organization SAM (Smart Approach to Marijuana) has been working to snuff out the local industry. Their efforts were overwhelmingly supported by Nevada County voters in the last election when Measure S, a compromise favored by the growers, was defeated by a huge margin. My guess is that SAM, the Sheriff, and their allies decided to use the phony deadline issue to strike while they still have the momentum.

Because, despite all the ranting and raving by the growers and users, the demographics haven’t changed, and even if they can register every millennial in the county it’s not likely to make up a nineteen point spread.

Now in defense of the establishment position, most of the neighboring counties have already banished outdoor grows. Following the path of least resistance, growers would naturally flock to the place where they can do business, thus creating a major headache for law enforcement and the neighbors who have to endure the odors and obsessive security behavior of the farmers.

Even people who aren’t against medical or recreational pot are put off by the attitude that “hey, it’s my right to grow wherever, dude!” The thought of a THC tsunami into our neighborhoods, and the talk of making us “the Napa Valley of pot” is enough to drive voters to the polls in droves. (And it should be noted, once again, that even the liberal stronghold of Nevada City won’t allow a dispensary within their borders.)

Unfortunately, there is little middle ground between these opposing forces. If it were up to me, I’d allow outdoor grows of a reasonable size (say twenty-five plants) on agricultural land with a 500 foot buffer zone to pacify the neighbors. Limit the number of permits. There should be a dispensary somewhere in the western county where legit patients can get their medicine.(Glenbrook?)

Let’s face it: marijuana is not going away, no matter how much you wish it. This new initiative is going to divide the community for decades, and in the end the growers will win.  It will just be ugly for everyone in the years between.

29 Responses to The Royal Flush