The World Is Askew 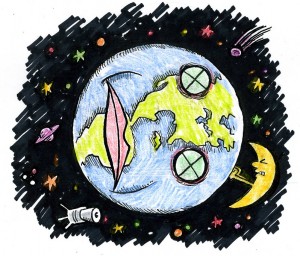 Things are getting back to normal here at Crabb Hollow, if there is such a thing as normal anymore. Mary Ann is recovering nicely from her surgery, I’m happy to report, and no more appliances have broken since my last post. (Knock on wood!)

If only the rest of the world was doing so well. To be sure, there are good stories. The new Pope appears to be living up to his name by embracing all God’s chillun, be they straight or otherwise. The Royals of Olde England have produced a new heir. They seem to be nice people and I hope they fare better than the last couple to occupy the 24/7 media spotlight. There are no doubt other uplifting events I somehow missed in the last month, but I was busy.

Most of the news I was able to follow has been less inspiring. The middle east just seems to get worse day by day, with America still trying to figure out who the good guys are. (Hint: Probably none of the above.) I was having trouble keeping the whistle blowers straight. Now was it Snowden or Manning who was holed up in Moscow? Just when I thought I had it figured out, Manning turned into Chelsea. If Chelsea was going to a California public school instead of a federal penitentiary, he/she would be welcomed in either shower room. Doesn’t matter what kind of equipment you’re sporting. Balls are optional. Balls? How about Swedish meatballs? It appears that some relative of the piranha has immigrated to Scandinavian waters, and male Swedes have been advised to cover their assets while swimming. And in TV land, the unlikely hit of the summer was a B-movie called Sharknado. Just when you thought the family jewels were safe out of the water, it’s raining Jaws.

Politics…What can I say? Weiner? Filner? Spitzer? They’ve all been groping the Queen of Denial while their wives stand nervously at their side and try to keep smiling. Meanwhile, the rest of the Democratic party has given up trying to craft any coherent policy on any issue. With much of their spending power stifled by the House of Reprehensibles, they have turned to writing thousands of new rules and regs to befuddle business and the public at large. That, and preparing for the coronation of Hillary Clinton in the next installment of Game of Thrones. They don’t see any credible threat from the right, and thus far there aren’t any more potential Obamas waiting in the wings. Both NBC and CNN plan to air Clinton biopics, much to the dismay of their news divisions. (Come on! We’re supposed to at least look like we’re not biased!)

But it’s a long time until 2016, and by then the cow patties might hit the windmill. You can bet there is a lot of praying, crossed fingers and small animal sacrifices going on behind closed doors in anticipation of the coming of Obamacare. If it fails, all bets are off, even with the inevitable neanderthal the Republicans will nominate as their standard bearer. Nobody thought a geriatric washed up movie star like Reagan could win either. States dominated by the elephantine party have made voter suppression their numero uno priority, just as jackass states are doing everything they can to make non-citizens eligible for everything from juries to free health care and education. Both parties are focused on winning, the citizenry be damned.

Here in the west, forests are defying the smoking bans enacted to save our clogged lungs. Fires rage across eastern California, prompting Governor Highspeed to declare an emergency in San Francisco just in case the flames reach Hetch Hetchy and boil away the city’s water supply. So far, Nevada County has been spared from a major conflagration. (I’d say ‘knock on wood’ again, but I’m afraid of creating sparks.)

I could go on. There are many more atrocities and absurdities to expose and ridicule, but I think that’s enough to chew on for now. And speaking of chewing, some dude plans on cloning the dear departed John Lennon from a rotten tooth extracted years ago. Go for it, I say. While you’re at it, maybe someone could find a lock of George Harrison’s hair so we could bring him back too. The Beatles could reunite and save our tired, askew world. You may say that I’m a dreamer, but I’m not the only one…

8 Responses to The World Is Askew