Twerk Will Set You Free 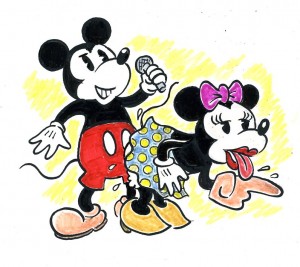 The world was aghast this weekend when former Disney superstars Mickey and Minnie Mouse performed the new dance craze, “twerking” on the MTV awards show.

“I am totally disgusted,” tweeted Morning Joe co-host Mika Berzerkski. Similar voices echoed the outrage across the world wide web, but the video has gone viral, taking so many hits that the server melted down like the Chernobyl reactor. The Chinese, whose internet is heavily censored by the government, anxiously await the video to bubble up somewhere west of Shanghai after it burns through the earth’s core.

When contacted for comment, the iconic mice issued a statement stating that they were tired of their goody two-shoes image. “It’s time we moved into the 21st Century. We reject the shackles society has foisted upon us with their outdated notion of morality. Get with the program, folks!”

In truth, Mickey and Minnie aren’t the first Disney characters to revolt against their boss. Just last year, Donald Duck announced that he was taking hormone drugs and planned to be surgically altered to become a female and marry his longtime lover, Gladstone Gander. He now goes by the name Donna.

Although his coming out was hailed by many as a groundbreaking event, some of his family were less than enthusiastic. His uncle, Scrooge McDuck, issued a statement from the prison cell where he is currently serving a five year sentence for bank fraud. “If I still had any money, I’d give it to charity before I’d will it to that heathen  dickless duck!” (McDuck is Irish Catholic.)  Donna’s former partner, Daisy Duck, went into a deep depression and tried to commit suicide with an overdose of sleeping pills. She is now reportedly in rehab at a Malibu facility. It was bad enough that she had to claim their children, Huey, Dewey and Louie were “nephews” to placate the studio’s morality clause, his years long infidelity with Gander drove her over the edge.

Mickey’s former comedy partner, Goofy, also ran afoul of the morality police. After decades of stardom, the studio’s decision to end their partnership left him with little money after he invested in Scrooge McDuck’s ponzi schemes. He found work as a sports analyst for ESPN for a few years, but was fired for making racist remarks on the air. He was homeless for several years until he was picked up by animal control and taken to a shelter where he was euthanized after seven days.

Mickey and Minnie have no regrets about their decision. After years of living in popularity purgatory, their careers have been infused with new life. As Mickey mused, “When in Sodom, do as the sodomites do.”

4 Responses to Twerk Will Set You Free