Welcome To The Club 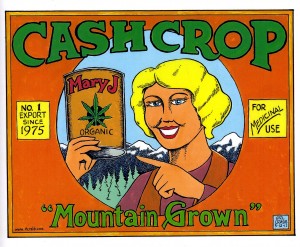 A recent news flash from the Great Northwest brought to light the newest threat to jobs: too much marijuana. When Washington voters approved legalization in the Evergreen State, they really didn’t put too many limits on production. Enthusiastic growers flooded the state, and after a severe shortage during the first season, now they find themselves buried in bud.

You’d think that would be a boon to users, but producers are holding firm and trying to smuggle the excess goods out to less enlightened states where scarcity still rules the market. Eventually things will sort themselves out, but there will be many small timers who won’t be able to compete with  well-funded plantations.

This may come as a shock to those who have spent the better part of their lives living in the shadows of the cash economy. During periods of recession you could always survive in the pot trade. Like alcohol and food, there are those who can always come up with enough scratch to feed their habit, even if they couldn’t make the rent.

Now, many of those who grew, trimmed or sold may find themselves in the company of artists, musicians, journalists, book publishers, travel agents, loggers, and many other professions in the 21st century. The greatest hope for some will be interference from the government. If the taxes are excessive and regulations for growers too restrictive, the small illegals may yet find customers in the underground market.

As for the rest, welcome to the club. Take comfort in the knowledge that heroin and cocaine are still illegal. Even the old time pure religious Taliban had to backtrack on the poppy farm ban to keep the jihad funded, and the Mexican cartels are not about to start growing papayas. And even with Democrats in charge, it’s not likely that the drug wars will end any time soon. Nature and human weakness abhor a vacuum.

5 Responses to Welcome To The Club