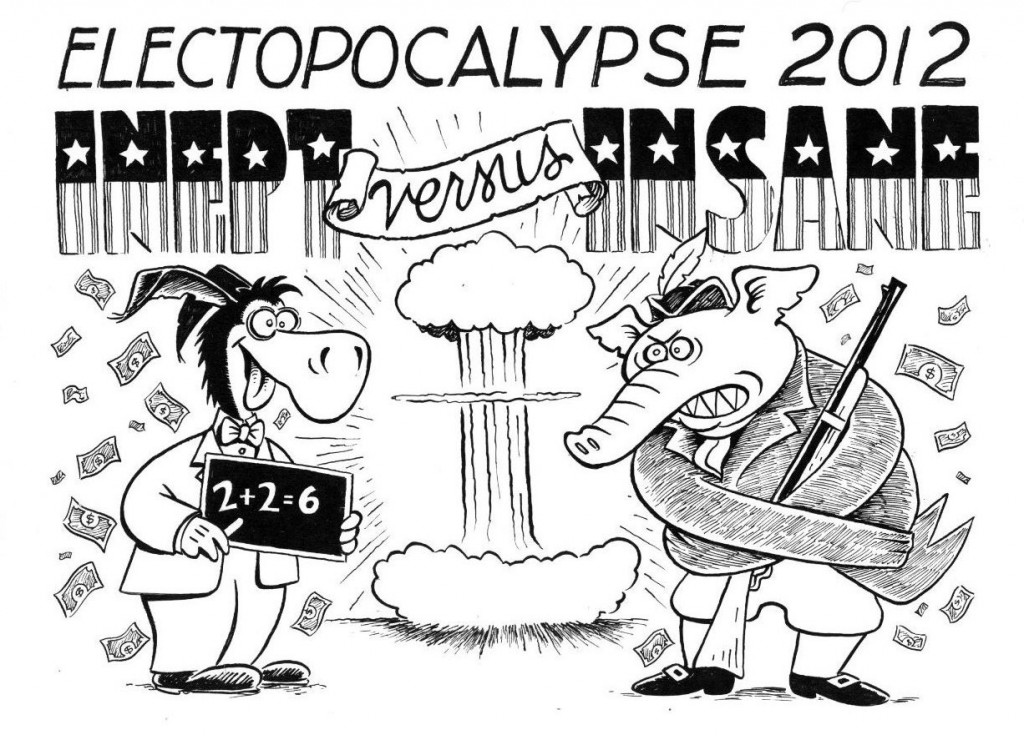 With only a few more days of our national schizophrenia to endure until the election, I’d like to offer a few final opinionated tidbits to chew on before the End Of Civilization As We Know It. The divining rod seems to be pointing toward Obama as I write this, but after the madness of the ’00 contest I am wary of making bold predictions in a country so divided and fickle. I’ll just go with how I see things playing out from both ends.

I was very hopeful after 2008. Few individuals have had the kind of opportunity that was handed to Barack Obama on a silver platter at such a pivotal moment in history. People on all sides were hoping to see some real progress to heal the gaping wound that is crippling America. And although you can make the case that Republicans didn’t want to hand him any kind of victory, I believe Obama blew a perfect chance to make them show their hand. While Democrats were climbing all over each other to craft a healthcare bill, he could have huddled with the Repubs and put together a tax reform bill, and probably could have convinced enough Blue Dogs to pass it. By that act alone, he probably would have nipped the Tea Party movement in the bud and done a lot to invigorate the economy. Would it have been hard? Sure, but if you’re a savvy negotiator and politician, that’s what you do.

So if Obama wins by a big margin, he’ll probaby become more entrenched in his class war and more debt. Despite what I hear from progressives who say we need to borrow trillions more to stimulate the economy and fuel more government, I don’t see how it can ever be paid back unless someone comes up with the Final Solution of abundant cheap (or free) clean energy. It’s not comforting to know that when you enter your doddering years, when you’re basically helpless, that the next three generation are going to be very pissed with you for the 60% tax they’re having to pay for our fifty year spending orgy.

If Romney wins, there will no doubt be a burst of economic activity, as businesses will finally gain some closure on what their rates will be. We are not Greece. There’s plenty of money buried in the backyard or in a treasure chest on a beach in the Caymans to stimulate the economy if unleashed. On the other hand, turning over every government program to a private business or charity is not in our best interests. (Who ya gonna call?…Hurricane Busters!) And there needs to be enough regulation to avoid another disaster like the Great Recession.

Who knows which Romney will show up at the White House? I find it hard to believe in a guy who has changed his positions more times than most people change their underwear.

I believe both men are honorable in their belief that what they are doing is best for the country, but I have zero trust in the political parties and their agendas. Both Democrats and Republicans have done everything in their considerable power to rig the system in their favor, voters be damned. Whether it’s the redistribution schemes of Big Government or the genuinely goofy social agenda of the right, we are in for some rough battles to come, no matter who wins.

And that’s my biggest beef. In a nation that is 50-50, depending on how the independents swing, how can either side claim victory? Look for the Campaign to re-take America to begin on November 7.