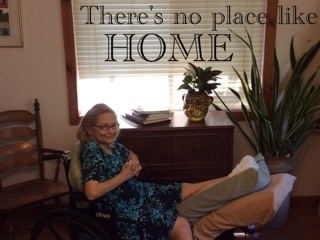 The last two months have been quite the ordeal here at Crabb Hollow. It started in May when Mary Ann began complaining about a sore toe. By 5/13 it was causing her so much agony that we had to go to the emergency room. To make a long story short, eventually it was diagnosed as an infection aggravated by her type one diabetes. She spent almost the entire month of June at Mercy San Juan Hospital in Carmichael and endured three surgeries to remove the infected area. After another two weeks at the American River Center, she developed a fever and was readmitted to Mercy. A massive dose of antibiotics was administered, and she was finally allowed to come home on July 1st.

Suffice to say that I know every pothole between Grass Valley and Carmichael. Thanks to everyone who helped out during this trying time.