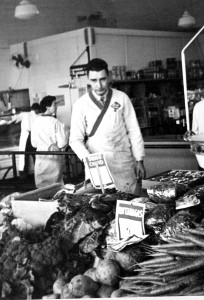 When I was growing up in Grass Valley during the sixties, I was aware of my family’s  Cornish roots, but it was never a big part of our lives. We ate a lot of pasties and my dad was a big tea drinker, but other than my grandmother’s English accent, there was little evidence of our European heritage.

Dad was not a joiner. He belonged to no civic groups and never ran for office. Unlike most of the local Cornish, he didn’t have a religious bone in his body. I knew this from the arguments he used to get into with my aunt, a prim and proper Sunday school teacher. It got so bad that she would sit in the car when dad’s brother would visit, rather than set foot in the house of the heathen Crabbs.

Only once did my father show any interest in his family tree. It was at his sixtieth birthday dinner in 1978. He was a little tipsy, the only time I can ever remember him being anything close to drunk. He suggested that he and I fly over to England and tour the old homeland. I never heard him mention it again. Maybe he didn’t remember, but more likely he thought about how much it would cost.

For the most part, he stayed out of the local limelight, and valued his self-sufficiency and privacy. He never asked anyone for help and never talked about any connection to his Cornish heritage, although he was somewhat scornful of the “Cousin Jack” chuminess that excluded those who weren’t related by blood or territory. It could be that he didn’t know much himself, since his miner father died when he was three years old.

I’ve been laid up with a cracked kneecap for the last two weeks, which has given me the opportunity to catch up on some long overdue reading. One of the unfinished books was Highly Respectable Families: The Cornish of Grass Valley, California 1854 – 1954 by Shirley Ewart. It covers the pilgrimage of some of the better known families across the Atlantic and through the jungles of Panama or around the Cape to get to the goldfields.

One of those names was Bennallack, a name familiar to me, although I had never been friends with any of that clan growing up. As far as I knew, there wasn’t any connection between our families, until I read the following passage about Sibley Bennallack Hansen…

According to Sibley, the most important Cornish value was concern for other people. The Cornish of Grass Valley cared about people and looked after each other. Stories of old James Bennallack describe his compassion and concern for anyone injured under his supervision; when Minnie Chinn Farley’s father was ill, she remembers that James  Henry Bennallack ( son of “Old James” ) always came to their home to see if anything was needed. The tradition is a fine legacy; one that, it seems, the people of Grass Valley have kept alive.

I had to smile when I read that. Back in 2003, my father began his slow decline and had to spend some time at a local convalescent home until he was strong enough to come home. One day when I came in to visit him, I was surprised to see an elderly woman sitting at his bedside.

I knew who she was, but had never known she was a friend of my father’s. And I still don’t know how she knew he was in the convalescent home. Somehow, she answered the call, and only now, all these years later, did I discover the reason for her visit.

Both Sibley and dad are gone now, but it’s nice to know they left us such a rich legacy. A fine tradition, indeed.

2 Responses to A Cornish Tradition