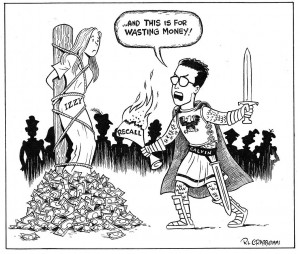 As I was finishing my contribution to the democratic process on Tuesday, I ran into Elizabeth (Izzy) Martin, who was likewise engaged. Izzy and I go back a ways in Nevada County politics. The year was 1998. Izzy was running an unprecedented write-in campaign for county supervisor after being dismissed as a planning commissioner by supe Rene Antonson. I had just quit my gig with The Union as a daily cartoonist and moved to a weekly spot on the editorial page with “It Takes A Village Idiot.”

Izzy won the election, beating Antonson, and became the fourth member of the “Gang of Four” with Peter Van Zant, Sam Dardick and Bruce Conklin. (and later, Barbara Green.) The stage was set for some of the most tumultuous years of politics in Nevada County history. Although all four of the supervisors were on the Republican hit list, Izzy probably suffered the worst of the hate campaign. Her kids were bullied at school, and she was harassed endlessly by anonymous callers and letter writers.

She took a leading role in obtaining the Wild and Scenic designation for the Yuba River, despite opposition from our Republican Assemblyman, Senator, and Congressman. She championed the doomed Natural Heritage 2020 land use initiative, which brought out every survivalist right wing nut job in the county. One of her more prominent critics was Calvin Clark, who tried to mount a recall campaign against her in 2001 and ran an unsuccessful bid to replace her the following year. He inspired the cartoon above, which horrified some people, but not Izzy. The original now graces her wall; a battle scar from a veteran of the land wars. Needless to say, she was not reelected.

These days Izzy is heading up the Sierra Fund, working to clean up the toxic legacy of our mining past. Her public profile is not as big, but she’s still fighting the good fight. We don’t always agree on every issue, but I respect her as an honest advocate for what she believes.

While we were talking she brought up a theme that has repeatedly popped up in my cartoons over the years; that the real battle is not so much Republican versus Democrat, but rural versus urban. When you look at the big map of the United States, it becomes painfully obvious. West coast politics is dominated by a thin blue strip at the edge of the Pacific, and everything east is purple-red and red. 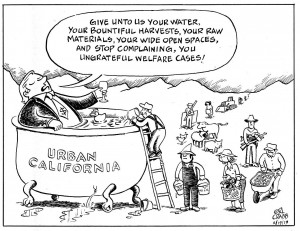 This divide has manifested itself into the State of Jefferson movement, even though the proponents acknowledge the concept is dead in the water. It’s a chance to vent and make some noise.

Nevada County tends to follow the national trend. When Democrats are popular, they do well here. (Izzy was elected during the Clinton impeachment debacle. Local Republicans were beaten across the board.) Four years later, California Democrats were still in shock from the recall of Gray Davis and election of the Governator. Izzy was another casualty of the times.

And so it goes. 2014 will be remembered as a red victory in Nevada County, but it will be forever tainted by the nastiness that pervaded the warring factions. Rightly or wrongly, the Sheriff Keith Royal’s reputation has been forever tarnished. Busting one of the prime movers of Measure “S” during the heat of the campaign was obviously politically motivated, and it doesn’t help that most of the charges have been dropped now that the election is decided.

The marijuana issue is a stark example of the urban/rural split. The “S” supporters were surprised by the size of their defeat, but I saw it coming months ago. Despite all the ugliness between the county and the advocates, the reality is that the vast majority of rural residents do not use marijuana and resent having to live next door to it, especially when the attitude of some growers is “Fuck you…it’s my right, dude!”

And all of us have been affected by the spat of anonymous letters that mysteriously appeared the week before Halloween. The attempt to subvert the city council election is an escalation of dirty tricks even worse than the dark days of NH2020. It appears that Terry Lamphier will be elected, thanks to a high number of absentee votes that had been cast before the “scandal.” Terry deserves his day in court, if it even comes to that.

So I was surprised to hear Councilperson Lisa Swarthout on the radio. Lisa seems to think that Terry should resign, for the good of the City. Huh? Maybe for the good of your majority, but not for the voters who made their choice on Tuesday. Lighten up.

Now it’s up to the winners in this contest to step up and try to heal these wounds before things get any worse, and I think we know they can always get worse. If you won’t do it for the good of the community, then do it to get back at me. You all could make me work a lot harder to find material for my cartoons.