A Night To Remember

There are certain events in life that radically change everything. A birth, a death, an illness, and sometimes an accomplishment that moves you another rung up the ladder of success. Such an event occurred in my life in the early days of 1975. I was living in Atlanta, Georgia with my pals Doc Halstead, Bill Smart and Charlie Williams. As I have recounted on other occasions, we moved to Atlanta in 1972 in the hope of putting together a new version of the Carrie Nation band. It was a long drawn out search for the right people, but by late ’74 we finally found the right combination with the addition of guitarists Marty Bone and Hugh Pitts and drummer Ken Ladenburger. Although we were fortunate enough to find people who were willing to back our effort to record a good demo tape, we were unable to break into the big nightclub scene.

That all changed after a lucky break put the band in front of a crowd of thousands, opening for a major recording act. Even though our efforts ultimately failed and the band broke up two years later, that experience opened many doors and changed our lives. And even though we never got rich and famous, the stories and experiences were priceless.

Not being one to squander a good story, I started a comic book series ten years later that was loosely based on my time in the rock’n’roll biz. Rockers was the story of a small town garage band that flirted with success, and I used the story of Carrie Nation’s big break as their catalyst.

The true story began when Charlie got a phone call from concert promoter Sims Hinds. Sims had a problem; Montrose, the opening act for headliner Humble Pie, cancelled a week before the concert date. He offered the opening slot to Carrie Nation, if we would agree to do the gig for a measly $150. When Charlie approached the band, there was much grumbling that we were being taken advantage of, and some members wanted to hold out for more moolah. Fortunately, cooler heads prevailed and the majority voted to take the gig.

Now one thing that hadn’t been mentioned was that more people had invested in tickets to see Montrose than Humble Pie, and to avoid a rush of unhappy patrons seeking refunds, there was no announcement of the change in the line up. We were oblivious to that, as the band furiously rehearsed in the days before the big show.

So I reconstructed that scenario for my fictional band, and this was how it looked when Sims made the introduction. (Note: I changed the name of Montrose to Mongo. ) The meticulous finished art here was done by George Parsons… 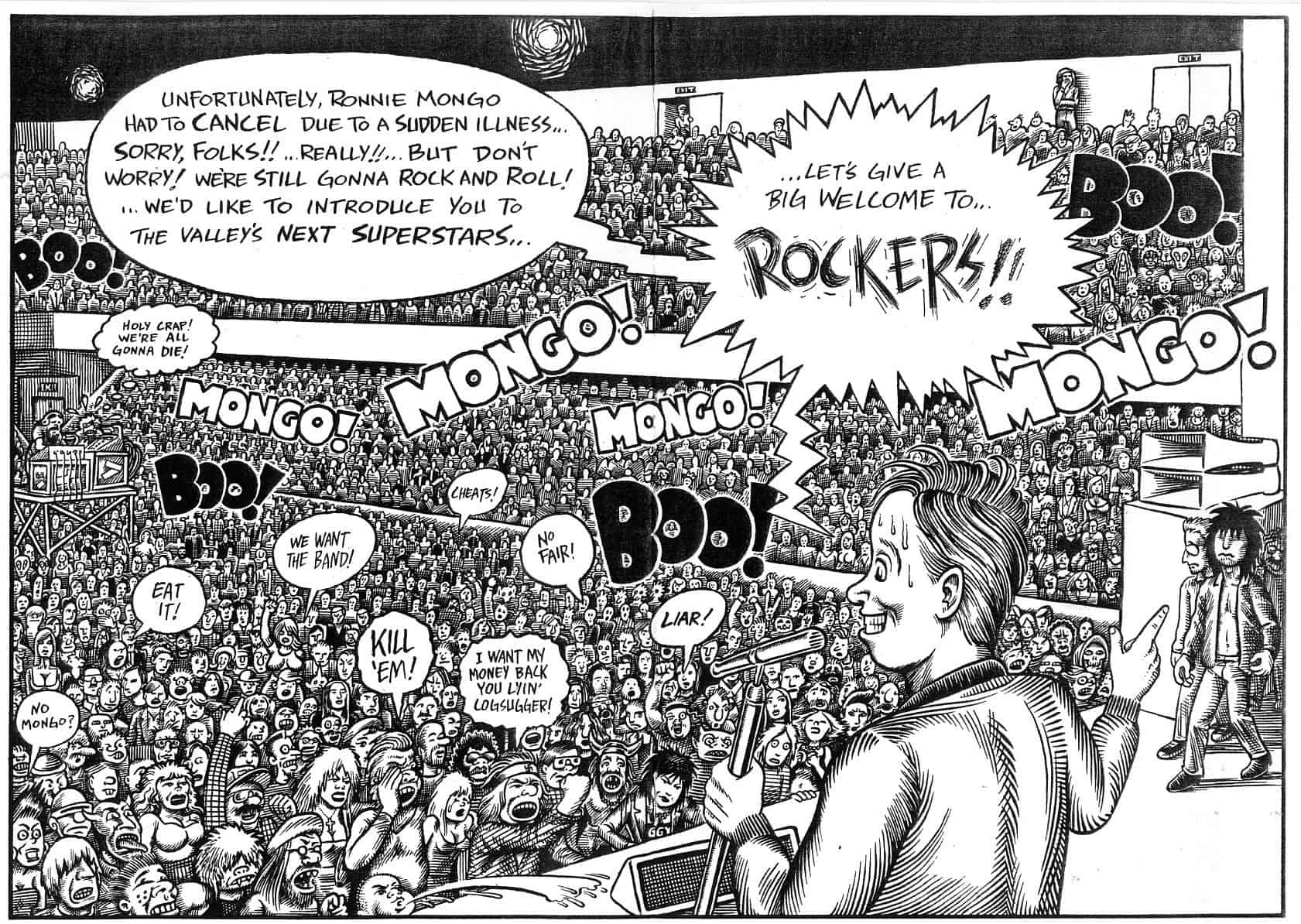 To say the crowd was hostile would be an understatement. I was stationed at the sound board, right in the middle of the crowd, and I was sure I was going to die if the band sucked. Just a few bars into their first number, there was horrible squealing feedback, which drove the crowd into a frenzy of hate… 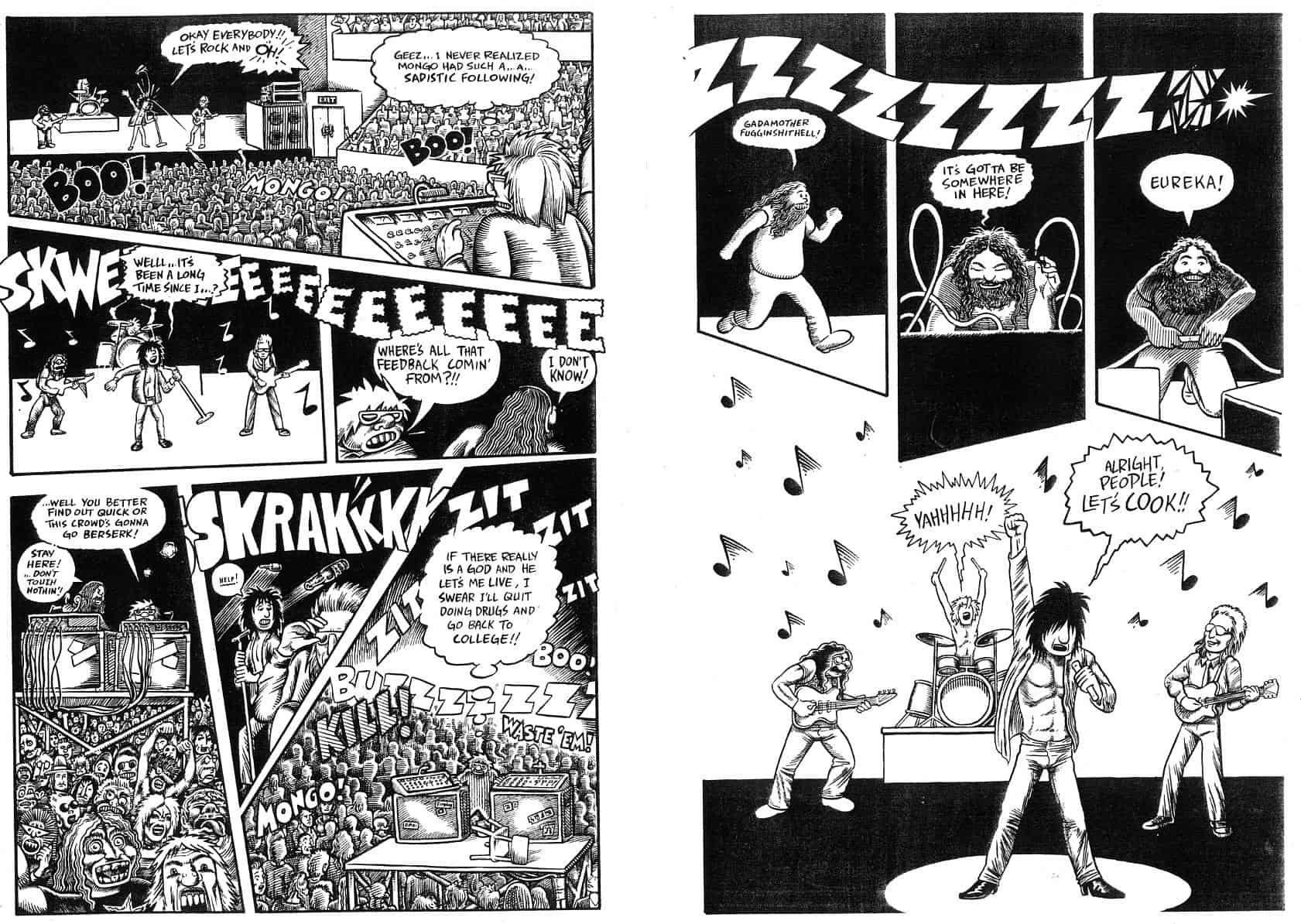 The sound man scurried down from the scaffolding and disappeared into the darkness, leaving me alone to hide behind the big board for what seemed like an eternity. “John” somehow tracked down the glitch and fixed it before the drug-crazed crowd exploded.

Then I saw something that I will never forget. The band, without missing a beat, sailed into one of their high-powered numbers. During the guitar solos, Doc struted over to the side of the stage and fanned himself with his cowboy hat while leaning on one of the PA towers. It looked great, and the hostile crowd suddenly broke into cheers. At the end of the set, there was a huge ovation, complete with the obligatory cigarette lighter seal of approval. 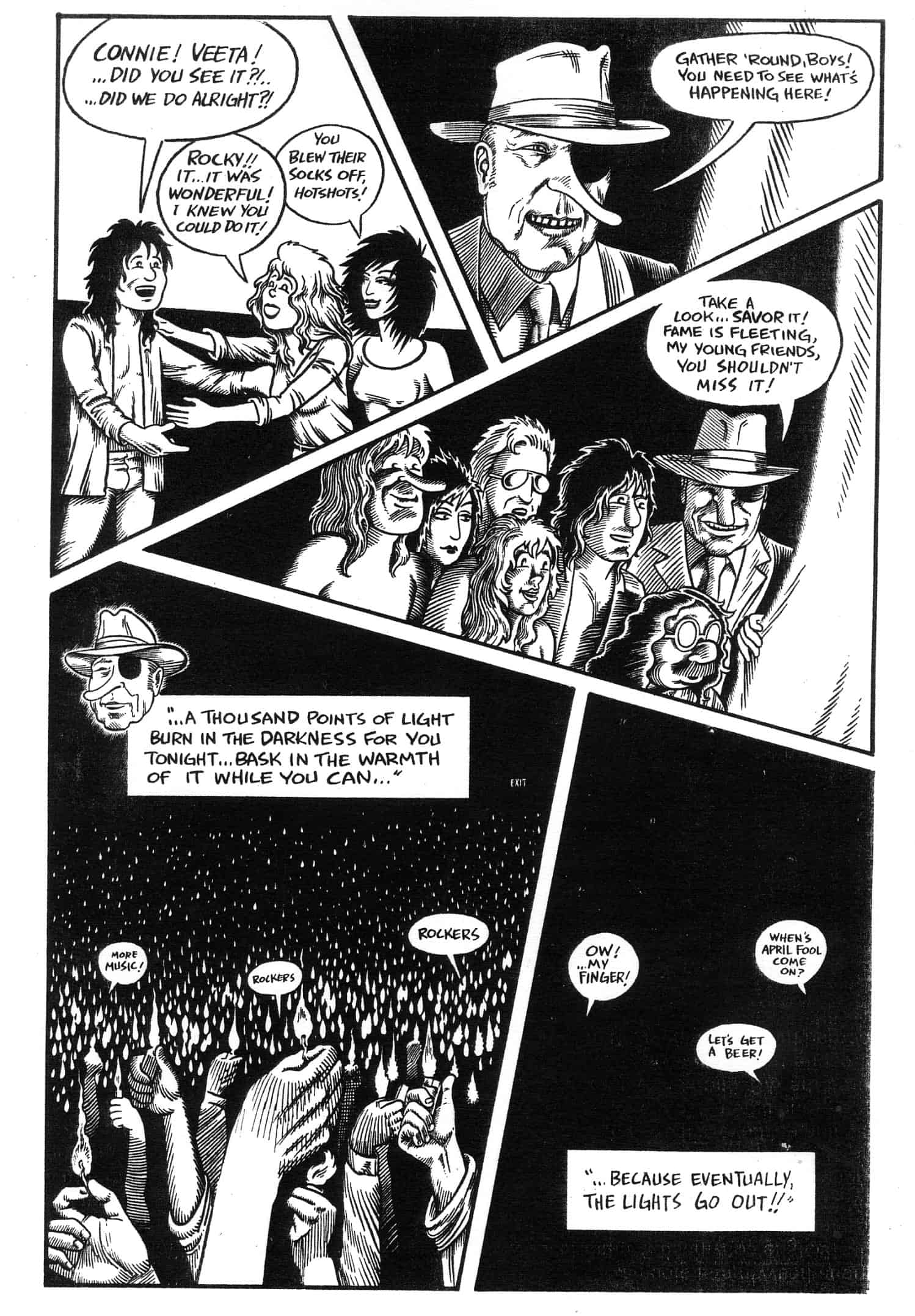 In the weeks that followed, there was a lot of buzz about the Carrie Nation band. We had carte blanche in Atlanta, a ticket to ride in the biggest music scene in the south. The band became regulars at the Electric Ballroom, and there was talk of a record deal.

Alas, the recording contract never came to pass, my biggest regret of that time. We came close to grabbing the golden ring, but could never quite close the deal. The same thing happened with the Rockers comics. Sex, drugs and rock’n’roll. Too much of a good thing.

But that was an eternity ago. Sometimes it’s hard for me to believe that my career as a songwriter only lasted six years, and that I’ve been doing the cartoon thing for almost thirty-five years. Even Rockers is ancient history now. Those glory days are gone, but the memories inspire me.  You never know when lightning might strike again.

2 Responses to A Night To Remember