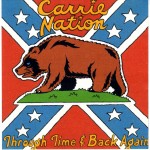 There are times I forget that I actually had a life before I became a cartoonist. I started down my present path in 1979, when fellow local cartoonist Dan O’Neill took me under his wing and tutored me in the fine art of sequential storytelling, but what was I doing before that?

Like many other young boomers, I was a huge fan of rock’n’roll music. I bought a guitar, but displayed very little musical ability. Still, I hung out with musicians and became a concert promoter, doing shows with Northern California bands at the old armory in Nevada City. I met another musical enthusiast named Charlie Williams in high school, and we dreamed the impossible dream of making it in the music business. Even though I couldn’t carry a tune, I could write lyrics, and Charlie and I began to write songs together.

There weren’t many opportunities in the area for bands back in those days. Charlie and I assembled a group of local musicians, but the one drummer in town played every song to the same beat. We were about to give up when Charlie’s Uncle John, a former trappist monk who lived in Atlanta, called and invited us to come and live with him. At the time, the Allman Brothers were big news and Atlanta was becoming known as a new musical mecca.

We didn’t need much encouragement, so along with fellow singer/songwriter Doc Halstead we pooled our meager resources and hit the road to Georgia in April of 1972. Eventually, bass player Billy Smart joined us. (Locals will know Bill as the current bass player for the Bob Woods Band, and just about every other band in NC.) There were some tough times ahead, but eventually we found the musicians and the sound we were looking for.

There were many adventures, too many to recount in one post, so I’ll try to fill in the gaps in future chapters. I’ll leave you with the high point of our career, one of the few remaining records of the band that eventually became known as “the Grateful Dead of the South.” This concert was recorded in February, 1976 at Winterland. Carrie Nation was opening for Elvin Bishop.