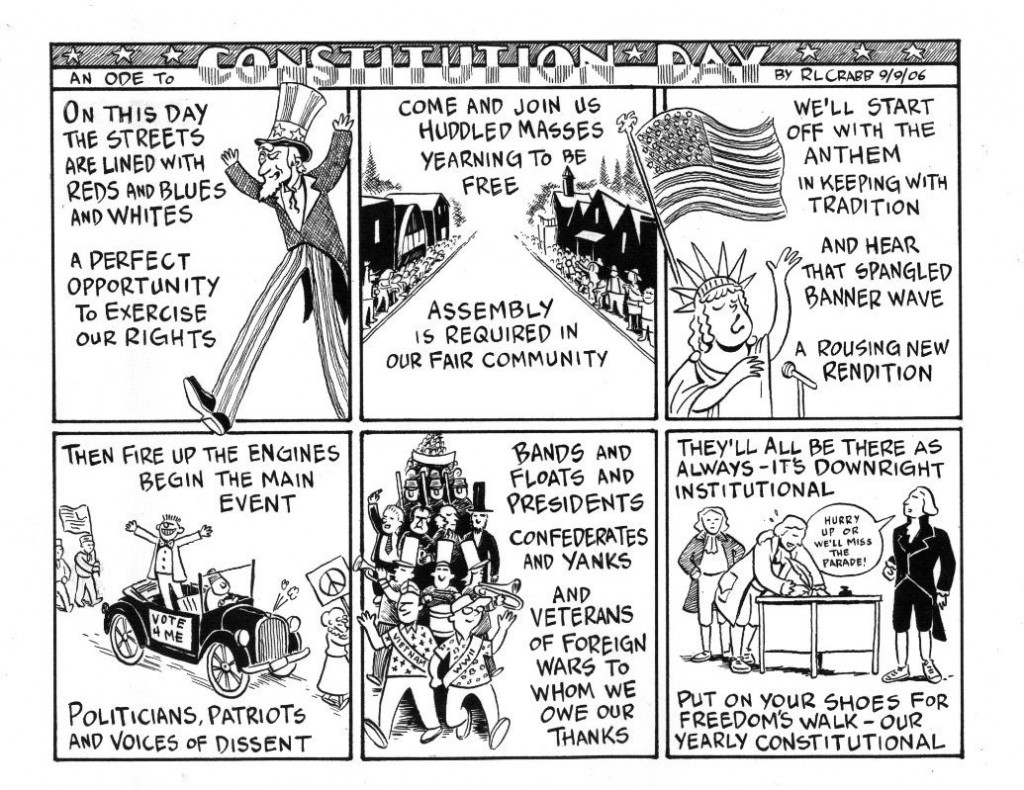 Well, now that the dumbass conventions are over and everyone is thoroughly depressed (except for those of you who actually believe the bullpucky that spews from the mouths of politicians) it’s time for us locals to put aside our differences and celebrate Constitution Day. This year’s extravaganza promises to be one of the best.

How do I know this? Because my dining room has been a construction zone for the last month. Under the direction of my beloved spouse, Mary Ann, and the incomparable Judith Lowry, the Merry Widow float has been taking shape before my weary eyes. More planning and revisions have gone into this project than the space shuttle. Indeed, there is already talk of sending it to Mars after the festivities, where it can roam the airless desert and clog my email with photos of the bleak landscape for all eternity.

I can’t tell you what it looks like, under penalty of death. You’d probably see it on wikileaks if Julian Assange wasn’t busy trying to slip past Scotland Yard and escape to the relative safety of the Ecuadorian jungles, where he no doubt has a secret base under a volcano waiting for him.

No, if you want to see this modern marvel, you’ll have to go to the parade on Sunday. (Starts at 2pm) I suggest wearing protective eyewear, so as not to be blinded by the brilliance of it all.

Also on display will be The Famous Marching Presidents, who will be celebrating their 25th constitutional down Broad Street. On Friday, the Chief Execs held their traditional pre-parade party at the stunning home of Jesse and Kay Connor. The place boasts one of the finest wine cellars in the Western United States, comparable with the one at the Hearst mansion. (I know. I was just there a month ago.) The only difference is  Hearst was smart enough to put a bank vault door on his to discourage overindulgence.

The Constitution Day event is by far the best parade in Nevada County, in my humble opinion. If you’ve never been, I’d suggest you attend while we still have a constitution to celebrate.

(And if that isn’t enough to fill your calendar, the Presidents are also hosting the “Silver in the Gold Country” art show in the main gallery of the Center for the Arts in Grass Valley. The show runs from September 4th through the 30th and there will be a reception on Monday the 10th from 6 to 8pm. The original art of the above cartoon will be on display (if I can find it in the garage before Monday) as well as other fine examples of art by the various participants of presidential pedestrianism.)