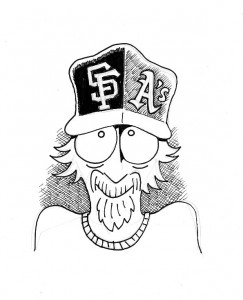 Somewhere in my closet I have one of these baseball hats. Over the years, it’s earned me sneers and catcalls from both sides of the bay rivalry. Blasphemy is the word that most often sputters from the lips of diehard partisans. I might as well have a picture of Mohammad perched on my empty noggin.

It don’t matter to me. I’m just thrilled to see both teams in the play-offs again. If, by some miracle, they both end up in a bay bridge series again (and the Almighty doesn’t smite us like he/she did the last time ) I’ll be rooting for the little guys from the East Bay. I’m a sucker for the underdog.

I doubt that I’ll be as enthusiastic as I was in ’89, when I strutted around the local watering holes wearing a puke-green jumpsuit over a baby-poop yellow jersey with an A’s cap sporting spring antennae topped with styrofoam A’s balls. It was horrible enough, but I had to make it even more disgusting by taking a marker pen and scrawling FUCKIN’ A’s across the back. I like to think I’m a little more mature in my doddering years. I can’t run as fast as I used to either.

But what the hell…The hat will get me in enough trouble, and you can bet I won’t be wearing it when I go to San Francisco during the outbreak of Giant’s fever. The Alternative Press Expo opens on the 13th just a long ball away from the stadium. If the boys in black and orange are still at bat by then, the neighborhood will be a madhouse, and anyone wearing the wrong colors will be drawn, quartered, and used for chum by kayakers in McCovey Cove.

Giant’s fans have long memories, and they’d like nothing more than to avenge the four-game pummeling they got last time. (But it was sweet for A’s fans who had to endure the humiliation of Kirk Gibson and the hated Dodgers the year before.) As gratifying as whipping the A’s might be, I’m sure they’d like to have a rematch with the Wankees…I mean the Yankees, who crushed the dreams of  young Northern California baby boomers back in ’62.  Vengeance is a dish best served cold.

Either way, it’s more fun than enduring the lies and zingers of the presidential mudfest. For a few weeks at least, we can root for someone worth rooting for.

34 Responses to Debate? …What Debate?