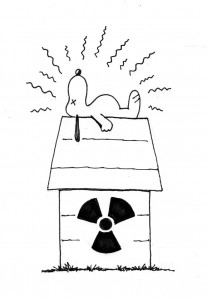 I may have mentioned here that I have been working on a graphic novel titled Scablands about my younger day adventures in Eastern Washington. Part of the story involves the Hanford Nuclear Reservation, where the plutonium that leveled Nagasaki was produced, and much of the nation’s radioactive waste is stored. Hanford is still in the news, even though the site has been going through a massive clean up for the past twenty years. Here’s the recent story… http://www.huffingtonpost.com/2013/02/16/hanford-nuclear-tank-is-l_n_2701197.html

Back when I was tramping around the scabby part of the Evergreen State, there were plenty of stories about Hanford. Here is an edited version of one story from the Oct. 16, 1990 edition of the Yakima Herald-Republic …

Hundreds of dead dogs, the remains of an unusual cold war radiation experiment, were shipped to the Hanford Nuclear Reservation for burial last month. Coming next: 17.5 tons of their radioactive excrement.

The reservation already is a repository for millions of gallons of radioactive wastes left over from decades of nuclear weapons production. The federal site has also accepted defunct Navy nuclear submarines and retired reactors for burial.

The 828 dead beagles, shipped from California in 55-gallon drums, were buried in trenches in Hanford’s 200 West area a few weeks ago. Their remains had been stored in freezers at the Institute of Toxicology and Environmental Health at UC Davis.

The last dog died at a canine-old age of 18.5 in 1986, 27 years after government-funded beagle experiments began at the university.

The dogs left behind tons of urine and feces. Since the wastes are radioactive, they must also be buried and shipped under regulations governing low-level radioactive waste.