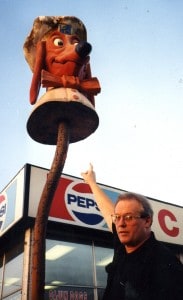 October 8th started out as a normal day. Make coffee, feed the cat, check my email, and see what’s new on Facebook. The first thing I see, and will never be able to un-see, was a post from my former roomie and fellow cartoonist J.R. Williams informing the world that Dennis P. Eichhorn has left the building.

It still hasn’t sunk in that I will never see Denny again, even though we haven’t been in the same room in over ten years. (Yeah, Denny, I’ll get up to Washington next summer. Sure I will.) Now if I do, it will be to pay my last respects to my old friend, along with all the others souls he touched in his seventy years on the planet.

Who was Dennis Eichhorn? He was many things; a bartender, a process server, a football player, a firefighter, a private investigator, a bouncer, a concert promoter, a criminal, and most importantly, a storyteller.

I first heard of him when I was preparing to move to Seattle in 1992. I was staying with friends who had just returned from “the big city” with a handful of new comic books. Among them was a comic called REAL STUFF, featuring real life stories by Eichhorn. The fact that he was doing autobiographical comics wasn’t surprising; it was the latest fad in the alternative sphere. What grabbed my attention was that, rather than stories of introspective angst and alienation, Denny’s stories were real adventures. Guns and drugs and wild sex galore, and he wasn’t afraid of showing himself in a less than inspiring light.

It was encouraging, since I had just made a publishing deal with Fantagraphics Books for my own auto-bio series, Adventures On The Fringe. I knew immediately that I had to hook up with this kindred spirit when I landed in the Northwest.

We hit it off, naturally, and I did a few minor collaborations with him. The alternative comics audience had mixed reactions to our stories. Some viewed them as braggadocio, and some accused us of embellishing. We had a few laughs over it, and decided to have some fun with the concept. The result was Real Lies, which appeared in the spin-off comic, Real Schmuck. 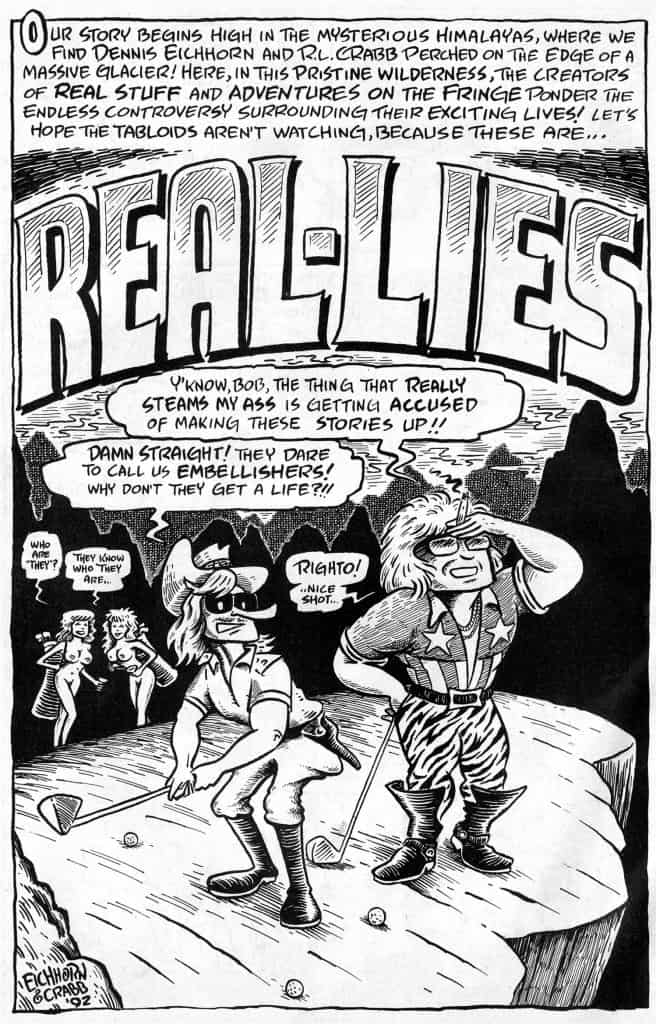 It was a fun collaboration, and we played it for all it was worth. While comparing our exaggerated genitalia, we discovered that we were siamese twins separated at birth… 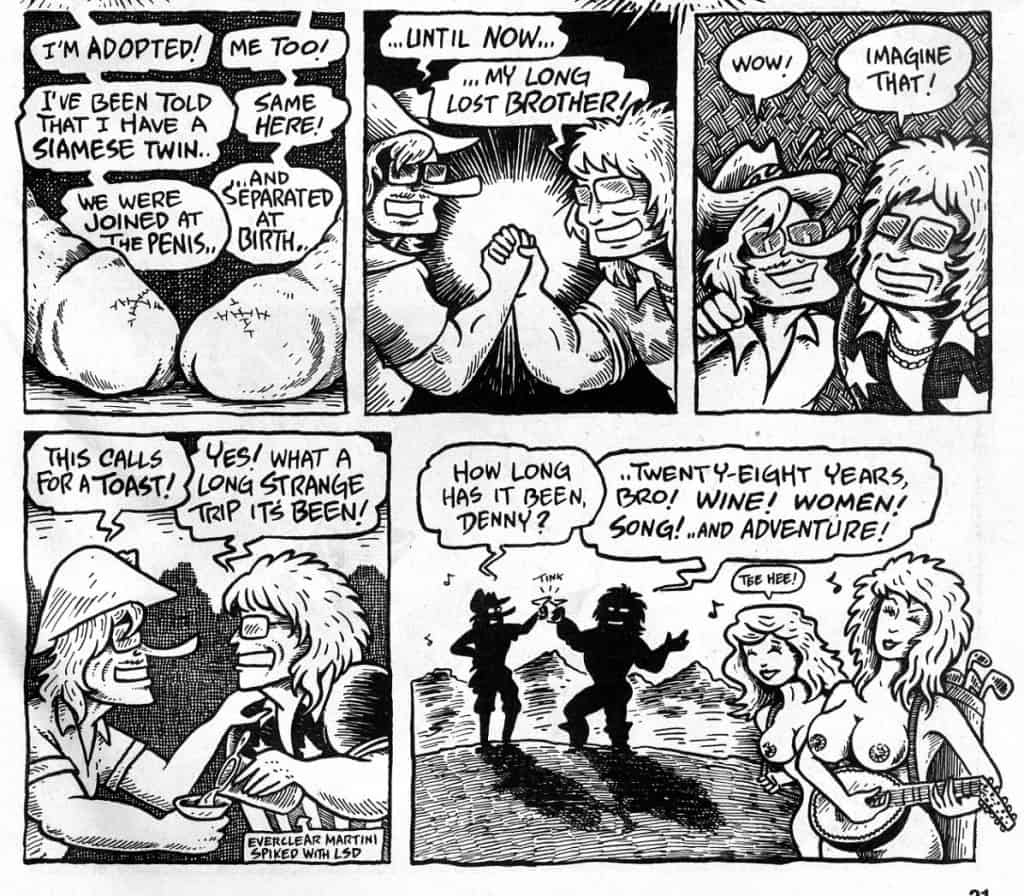 Eventually I left Seattle and returned to Nevada City, but we continued to work together. Denny was hired as the editor of Loompanics Unlimited, a libertarian book publisher based in Port Townsend. My first job there was adapting Bob Black’s essay, The Abolition Of Work as a comic story. Over the years, Loompanics helped to keep a roof over my head.

Denny eventually left Loompanics, but I heard from him again in 2003 when he was preparing to collect his best stories into one volume. He needed an interior title page, and asked if I would be interested. I dug out all my old copies of the comics and did my best to mimic the styles of the many fine cartoonists who had graced the pages of Real Stuff over the years… 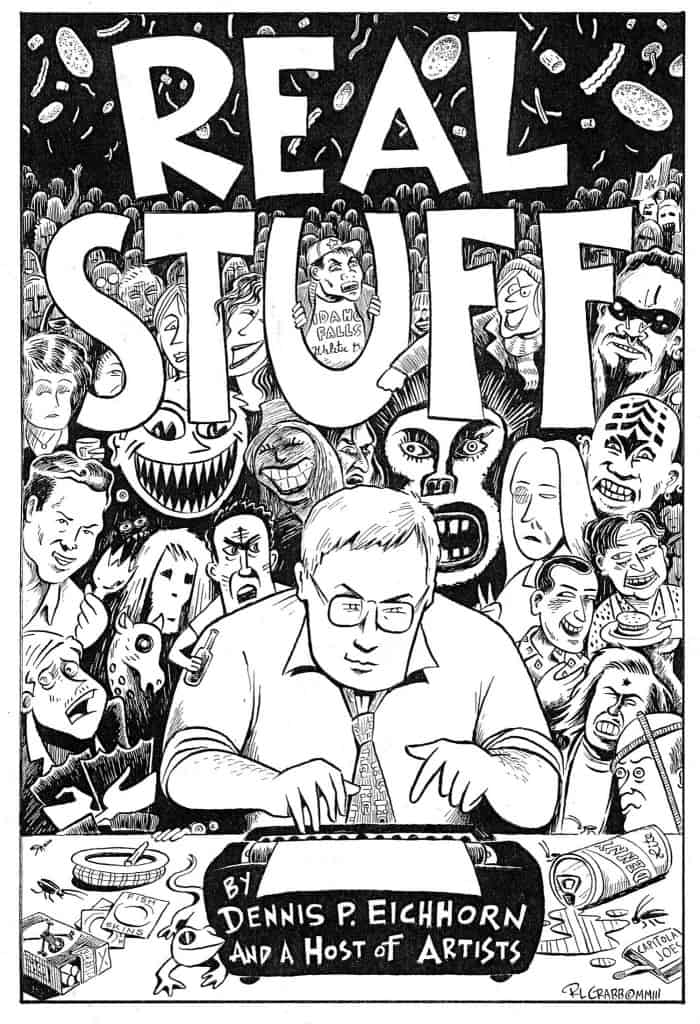 After I sent him a copy of the piece, he asked if he could purchase the original. I remembered that years earlier, during a particularly dry spell in my career, I went to the post office one day and found a letter from Denny, along with a hundred dollar bill. It was like manna from heaven at the time. I sent the artwork to him, with a note telling him that it had already been paid for as far as I was concerned.

After that, we didn’t correspond as much. Life has a way of distracting you from relationships carried on over long distances. So I was happy when I received a request from him about three years ago to do another story, this time for the prestigious mini-comic Mineshaft. In the time between collaborations, I disappeared from the dwindling alternative comics scene. I’ve been doing my strip It Takes A Village Idiot in my local newspaper to keep my hand in, but I longed to be able to do a comic book story again.

What Next? would rekindle my love of comic book stories, and working with my old pal again. The only problem was, due to the complex script, the story ended up being nine pages long. Mineshaft is flooded with submissions from many cartoonists, including Robert Crumb, Jay Lynch and others. They just couldn’t find room for us.

Finally, Denny contacted me with the news that he was including our story in Extra Good Stuff. The book was picked up by Last Gasp publishing, the last of the original underground publishers. (Thanks, Ron Turner!)

In a life full of irony, What Next? turned out to be somewhat prophetic. The story follows Denny as he enters the hospital for a cardioversion to “reset” his heartbeat. While waiting for the doctor to arrive, he sees on the television that fellow comics writer Harvey Pekar passed away at age seventy. During the procedure, Death enters the room and looks at Denny and the ailing patient in the bed next to him before taking the older man away. At the end of the story, Denny wonders if the Angel of Death got the wrong guy. 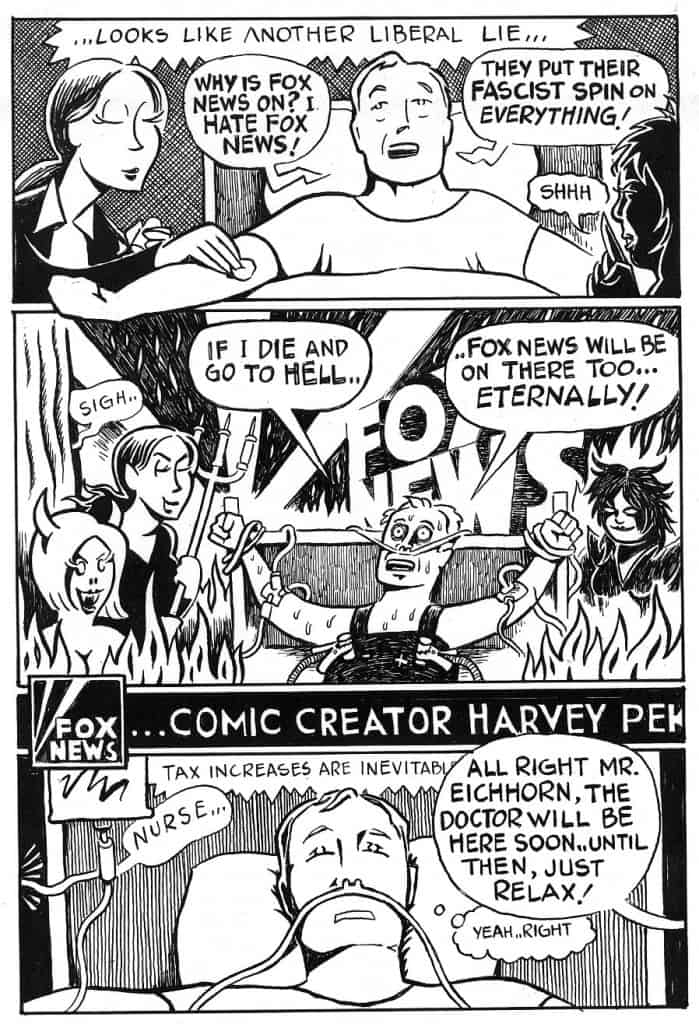 In the present, Denny had recently contracted pneumonia and was having a hard time of it. He was reluctantly taken to the hospital and put on a respirator, but after complaining of the pain he was taken off the machine. He passed away with wife Jane and his daughter and grandson present. He died at the same age Harvey was when he died a few years earlier. And here is the ironic part: Denny passed away on Harvey’s birthday, October 8th.

He couldn’t have written a better ending. So long, old buddy. 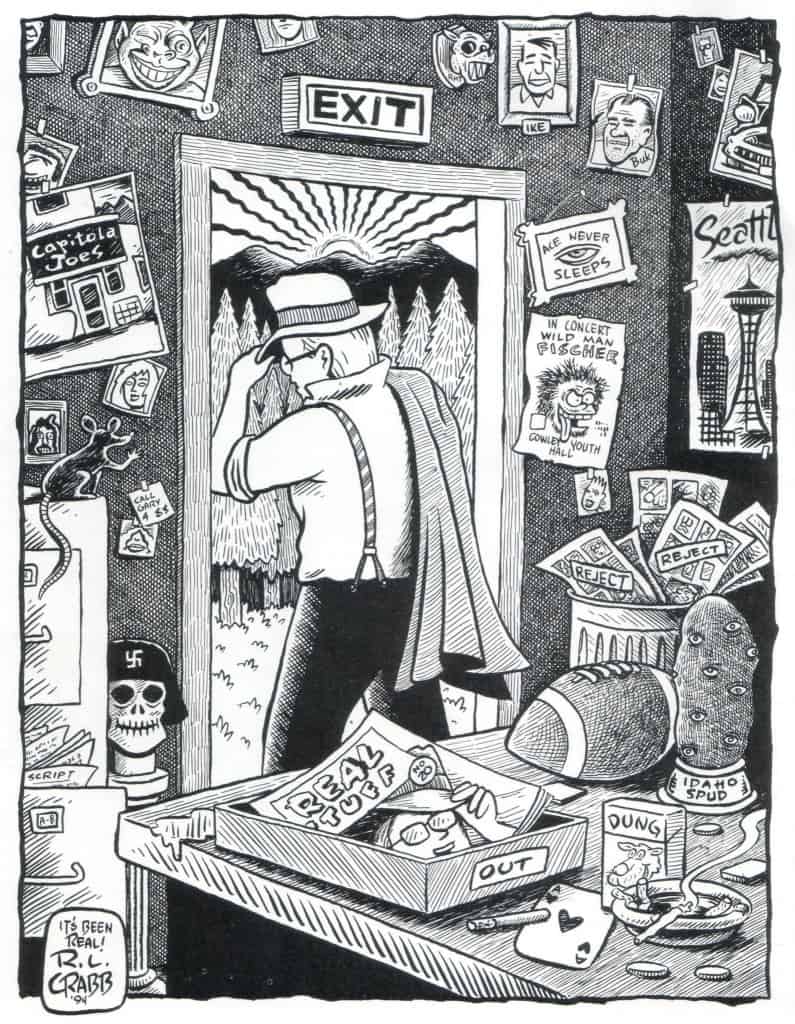