Don’t Have A Cow 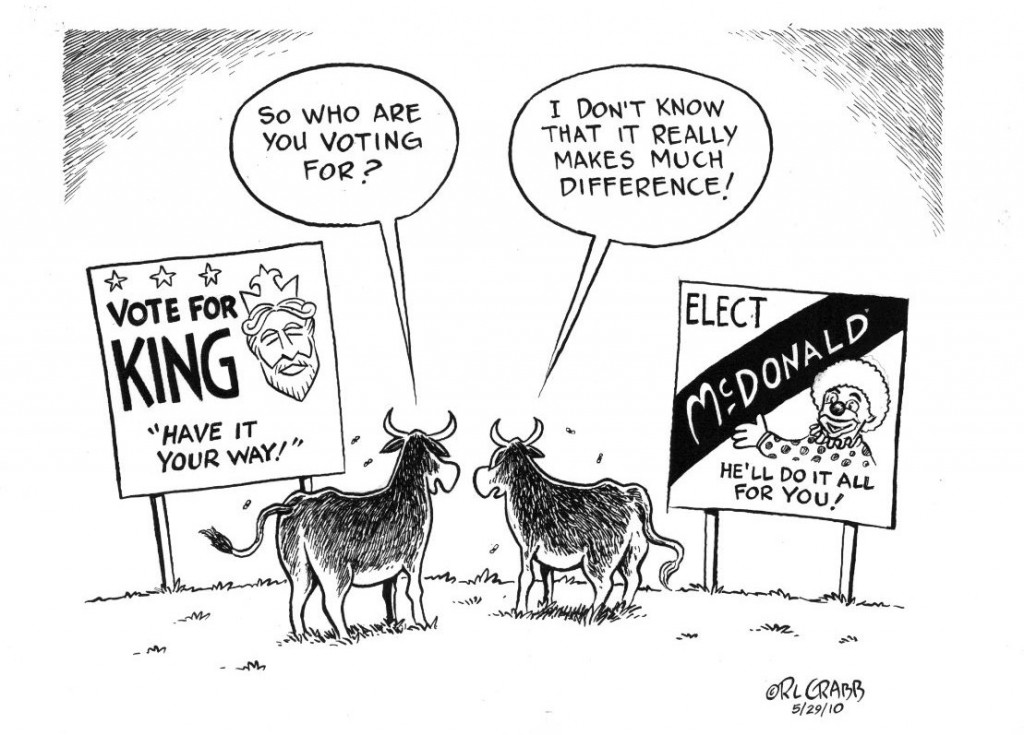 I seem to have annoyed just about everyone this week. It’s a character flaw that’s followed me throughout my life and at least partially explains why I’m not as successful as some of my other cartoonist brethren. I’ve been fired from more jobs than most people have ever had. It’s a good bet that I’ve lasted at The Union as long as I have because they don’t let me anywhere near the newsroom, where I would no doubt instigate some kind of office revolution.

It’s not that I don’t admire those who take a stand for their party’s principles, or those who put their opinions online where they will be subjected to the meat grinder of criticism and ridicule. I value the opinions of all those who wander into my little corner of the internet, whether I agree with them or not. (Just don’t make it personal, hint, hint.)

But I just can’t help but notice the inconsistancies in what some parties and governments say and what they actually do. It’s hard to refrain from pointing out hypocrisy when it’s in my face. It’s obvious to me, at least, when the national dialogue has sunk to the level of Romney Hood versus Obamaloney, we are all in deep doo-doo.

By pointing out these flaws, my hope is that it might cause a little introspection, thereby modifying the hardliner’s rhetoric and finding some common ground with his or her adversaries. Right. If anything, it usually leads to the digging in of heels and clenching of fists. No quarter, no sense.

That makes it even harder for my pea-brain to comprehend. Here we have this imperfectly wonderful country, and we’re willing to flush it down the toilet of history to preserve our unwavering belief that there is only one true path to the future. Even more annoying is that both parties actually believe that they can hold on to a majority long enough to implement their vision. If anyone hasn’t noticed, the last five or six national elections have been decided by spaghetti-thin margins. Factor in the Electoral College and the picture gets even muddier.

So Congress spends most of its time introducing bills that they already know are dead on arrival, just to make points with the base. That’s when they’re not perpetually fundraising and campaigning, or traveling to exotic locales on “fact-finding” junkets. Meanwhile, businesses and families continue to suffer from the uncertainy fostered by our elected representatives.

That’s why I wonder why so many people keep voting for these outdated institutions, hoping that this time they’ll get it right! History seems to dictate otherwise. And it doesn’t help that there is no credible third party to break up the duopoly. Like I’m going to vote for Rosanne Barr. Gary Johnson isn’t a bad choice for the libertarian-minded voter. I’m sure he’ll pull some of the Ron Paul votes away from the Republicans, but probably not enough to make a difference. Most people believe we need more government than the Libs would allow, they just want it working for them rather than against them.

Yes, my life would be much easier if I could just swallow the Kool Aid and bow to the party line of one or the other. Elections are one of the few growth industries in this funky economy, and I could make good money demonizing the enemy with my trustly croquill and a sheet of paper. But most media outlets have joined the great divide, and will only allow speech that backs up their own bias, true or not. Ah well, Kool Aid is fattening anyway.

Since I have cows in today’s entry, I can’t help but notice the debate over at Rebane’s Runminations has shifted to a discussion on the evils of meat. I’ve seen this one coming for awhile. The Forces of Goodness and Health point out that red meat is a bad thing, be it cholesterol, overgrazing or cow exhaust. It’s also a way to get rid of those corporate fast food restaurants that clutter our highways and streets. They’ll try to adapt; think Broccoli King or Mc Carrot’s, but I doubt it will catch on. We’ll just find our protein elsewhere, and the squirrel population will suffer.

Now I’ve probably upset the digestive systems of you vegans out there, but that’s the way it goes. Everybody’s mad, and I didn’t want you to feel left out.

21 Responses to Don’t Have A Cow