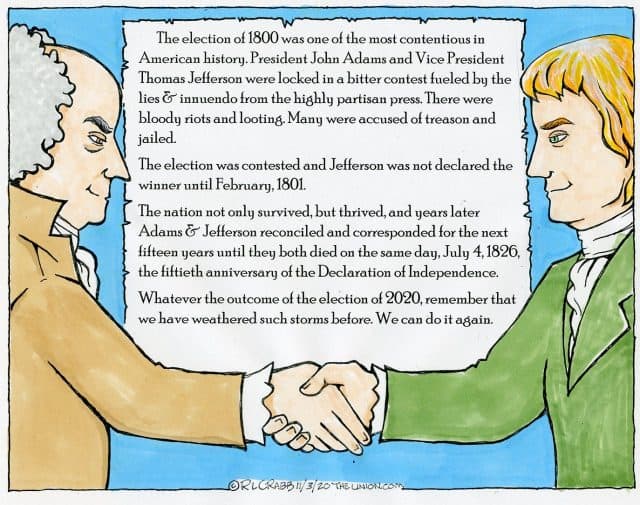 Fun Fact: Jefferson believed that the nation would require “a little rebellion now and then to clear the atmosphere.”

Fun Fact:James Callender of The Philadelphia Aurora described Adams as “a hideous hermaphroditical character which has neither the force and firmness of a man, nor the gentleness and sensibility of a woman.” (Calender was arrested for inciting the American people against the President. He was found guilty and sentenced to nine months in prison.)

Fun Fact: One New York paper assured its readers that a Jefferson victory would mean civil war. Hordes of Frenchmen and Irishmen, “the refuse of Europe,” would flood the country and threaten the life of ” all who love order, peace, virtue and religion.”

Fun Fact: Although Adams was a Federalist, he was not embraced by all in his party. Alexander Hamilton launched a letter campaign to his High Federalist coterie declaring Adams as unfit and incapable as President, a man whose defects of character were guaranteed to bring ruin to the party.

(Fun Facts courtesy of David McCullough, from his biography of John Adams.)

3 Responses to Elections Then & Now