Farewell To A Curmudgeon 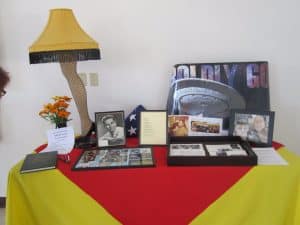 This last Sunday, a group of Nevada City’s hardiest survivors said farewell to another fallen comrade, Mr. Terry Pittsford. When I announced the event a few weeks ago, I was unsure how many would show up. We’re not getting any younger, and with Terry, I didn’t know how many former friends he might have offended before his untimely demise. 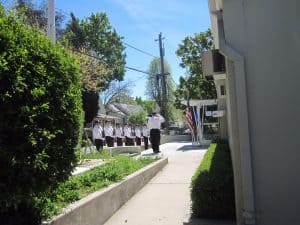 At any rate, I knew we could count on the honor guard, which would have made Terry happy. He was proud of his service as a combat photographer during the Vietnam fiasco, and would have taken some satisfaction that the sound of gunfire probably frightened any hippies that might have been in the vicinity. 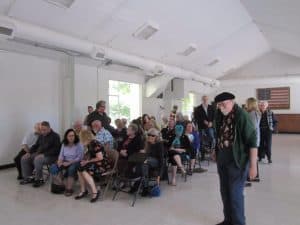 I shouldn’t have worried about attendance. As you can see, there were a good many locals who still had fond memories of Terry, and were willing to admit it in public. There were numerous testimonials lauding his generosity, humor and crankiness. 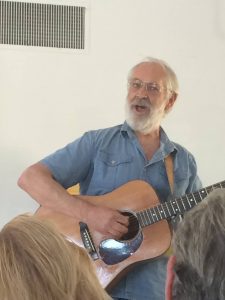 One thing that worried me was the unfortunate absence of Dakota Sid Clifford. (He had a gig in Fremont that day.) Many moons ago Sid had penned a song called “Bullshit” that was as close to an anthem for Uncle Rumple (Terry’s alter ego in his restauranter days) as melodically possible. Fortunately, Richard Thomas stepped in to fill the hall with the familiar chant, with everyone joining in on the chorus.

The event was also a reunion, with Bobby Angel traveling all the way from Lost Angeles to relive those early days of KVMR, when it was just a cabin full of tubes and wires on the summit of Banner Mountain. (Shown here with fellow veteran broadcasters Allison Miller and Francisco Lovato.) 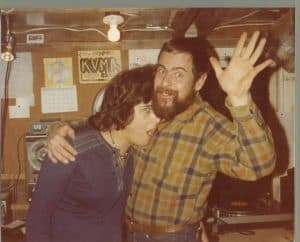 I’d like to thank everyone who took the time to show up, and help make Terry’s last party a rousing success. We are older now, and our numbers dwindle by the year, but the spirit of Nevada City lives on, as will our memory of Uncle Rumple and the joy he gave us. Amen.

4 Responses to Farewell To A Curmudgeon