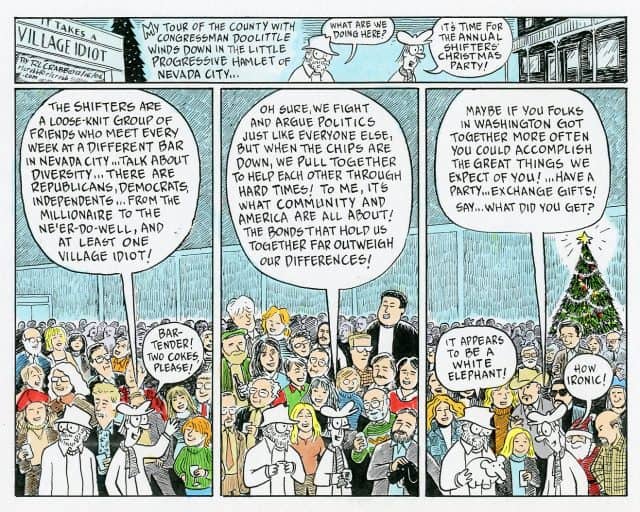 Back in 2006 I did a series of cartoons reimagining Dickens’ Christmas story with me as Marley and former Congressman John Doolittle as Scrooge. That period of Nevada County history was the tail end of a contentious decade of rough and tumble politics, beginning with the election of four progressives to the Board of Supervisors and ending with three of the four being ousted by conservatives after four particularly nasty election campaigns.

The rest of the world was was in pretty bad shape as well. The 2000 election, 9/11, Afghanistan and Iraq were dividing the nation. Congressman Doolittle, along with Texan Tom Delay, were leading players in the Republican House of Representatives. Doolittle was rarely seen in Nevada County, at least by those who didn’t vote for him. We would usually hear about him giving a speech at some GOP function a few days after it happened.

Meanwhile, our little community of friends gathered every Friday at a different drinking establishment to celebrate the end of another work week. We were known as the Shifters, or formally, Sparky and the Shifters, after our favorite bartender and spiritual leader David “Sparky” Parker.

Sparky had been relieved of his employment at Cooper’s, the bar formerly known as Wiley’s, so it was decided that we would take our business elsewhere and spread the wealth to the other saloons in Nevada City. That was the extent of our public participation. We weren’t political. We weren’t a non-profit charitable organization. We were just a diverse band of friends who enjoyed each others company.

Every December we held our Christmas “white elephant” party and dinner at the National Hotel. At our high point of attendance in the early years of the century we filled the dining room and bar.

In my cartoon series, I toured Nevada County with Congressman Doolittle, just to show him there was so much more to our hometown than the narrow constituency he catered to. I thought it would be fitting to end the tour at our Christmas party.

It saddens me to look at the message I tried to convey in this cartoon today. The hope that we could overcome our differences has all but disappeared in 2020. In a mere fourteen years we have become a dysfunctional mess, and both parties have contributed to the decline. The idea that the only way to govern is to eliminate the opposition has brought us to the brink of civil war, as unthinkable as that seems in the 21st century.

The Shifters have changed through the years as well. So many of the faces I rendered in my cartoon are no longer with us, either by passing away or leaving the area. Attendance has steadily dropped over the years. Covid 19 eliminated our choices of indoor meeting places and the weather has limited our outdoor choices.

But we persevere. The core of the group keep in touch with other, and come the spring we’ll answer the call, hopefully at our favorite watering holes. Friendship is a valuable thing, and absence makes the heart grow fonder.

What kind of world we’ll find there is still up in the air. Will “the bonds that hold us together far outweigh our differences?”

I continue to hope.

1 Response to Ghosts Of Shiftmas Past