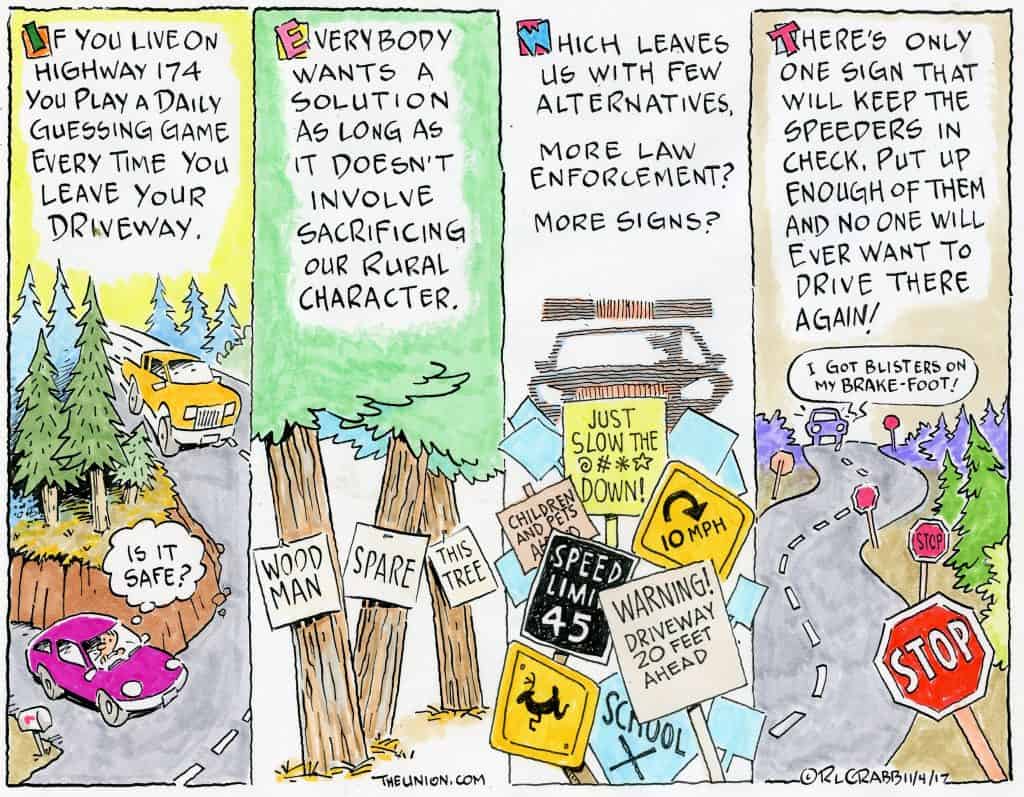 Driving up Highway 174, I see that a group of trees next to Seven Cedars Drive have been marked for removal in Caltrans planned widening project. It’s an issue that hits home for me, because I used to live there back in the 20th Century.

As the first panel in the above cartoon illustrates, pulling out of the drive onto 174 was a daily gamble. It was impossible to see what might be speeding toward me in the southbound lane.

One wet wintery day, I lost the bet. As I pulled out to make a left hand turn, a car came around the corner. I should have hit the gas, but instead I stopped and tried to back up, and the gearshift jammed. The oncoming car hit his brakes, but slid into the front end of my station wagon, tweaking the frame. Ironically, the car was a Caltrans vehicle.

It ended up costing me a lot of money and time, and I was determined to do what I could to remedy the ‘dead man’s curve.” I wrote a letter to my neighbors and stuffed them into the mailboxes, asking if they would support my efforts. The only response was from Mrs. Ruess, whose late husband had originally developed the road. Together we petitioned Caltrans to improve the condition of that particular stretch of road.

They did respond, but at the time they cried poverty and said they were unable to initiate any road improvements. They suggested I talk the neighbors into extending the driveway up the road and connecting to a safer access to the highway.

Yeah, like the neighbors were going to go through an environmental review, deal with the county, and spend thousands of $$$ so I could feel better about pulling into traffic. That was the end of my quest.

Until recently, when Caltrans dedicated millions of dollars to finally deal with the situation. Of course, today’s residents have rejected the plan as overkill. Along with the marked trees next to Seven Cedars, there’s a sign denouncing the removal. They are braver than I was when it comes to entering the now-busier highway twenty-three years later.

When I posted this cartoon, I was pleased to see at least a few people thought my cheapo solution of a stop sign at Greenhorn Access Road was a decent proposal. Too bad they didn’t consider it all those years (and many accidents) ago.