As I mentioned in the comments on the post about Bob Lickter, Nevada City Independent founding publisher Bob Wyckoff departed this mortal life last weekend. Bob accomplished many good deeds in his time here, and I’m sure his obituary will chronicle them much better than I could. 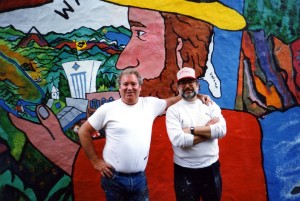 There was only one occasion that Bob W. and I locked horns, and that was the Great Battle of the Muralamo, back in 1992. I was living in Washington state at the time, but I still contributed cartoons to The Nevada City News, through editor Steve Cottrell. (Photo of Scott Pollack and the artist. Photographer unknown.)

Steve called and filled me in on the uprising. Bob Drake, a noted curmudgeon and owner of Wiley’s (now Cooper’s) Bar on Commercial Street, had commissioned Dave (Sparky) Parker to add some life to the bare wall adorning Wiley’s outdoor patio. Stepping up to the challenge, Sparky arrived with buckets of paint and a vision of our cute little town. He was well into the project when Wyckoff happened to walk by and see what was going on behind the wrought iron fence that separated the patio from the City’s historical ordinance.

Or so everyone thought. Wyckoff immediately contacted the authorities and all work on the masterpiece was halted. The next step was the order from the planning commission to strip the wall and replace the painting with a nice bland earth-colored pastel coat of paint, in accordance with the decrees of city hall.

A resistance movement emerged. Reporter Nuke Brunswick wrote a piece about the coming of ‘the art police” and I was asked  to come up with some inappropriate drawing to follow it.

I’ve never been a fan of the art police. While I agree that NC shouldn’t be covered with murals and graffitti  like some towns have done, the Wiley’s piece was on an interior wall, behind a gate which the owner offered to cover with native organic ivy to hide the blemish from touristy eyes. But the city, with Wyckoff leading the charge,  wouldn’t go for it and demanded its immediate removal.

So I drew Bob hanging from a lamppost gallows, and it made the rounds in town. I also did a t-shirt for the bar that declared “SCREW THE MURAL -SAVE NEVADA CITY!” I still have one somewhere.

Being that I was living in Washington state (and that’s another story you’ll be hearing about this year) I didn’t get to argue the point with Mr. W. I heard he was mad about my unflattering portrayal of him, but by the time I got back to town the whole thing had blown over and was largely forgotten.

The last time we got together was a couple years ago when we were hawking our respective books at the fairgrounds. We didn’t do much business (and Bob kept giving his stuff away for free), but we had a grand time talking about Nevada County history and telling off-color jokes. Neither of us ever mentioned the mural episode. Life proves day by day that it’s too short to carry a grudge for too long. 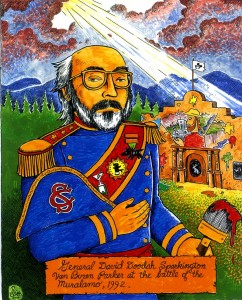 (Just like the real Alamo, the mural was eventually defeated and buried into art history. Several years ago, I did this portrait of General Dave to commemorate his heroic struggle against the establishment.)