Yesterday we spent the afternoon at Dakota Sid Clifford’s annual George C. Bendover celebration at his home, known as the Chaos Campground. (Still the best party in Nevada County, in my opinion.) Some of the area’s finest musicians were there, doing what musicians do. Among the participants were Steady Hand, The Caterwaulin’ Caravan (featuring Sid, Brendan Phillips, and others), the first local performance by ex-resident Harry Harpoon in a quarter century, and one of my favorite bands, The Buffalo Gals, featuring my pals Jonathon and Margo Meredith.

After the performance, Jonathon and I had a chance to catch up on current events. We were reminiscing about days past, like the time Mary Ann and I visited their place in Malibu back in the twentieth century. Jon and Margo were caring for his dad, actor Burgess Meredith and he invited us down south to see their home in the famous Malibu Colony, since it was understood that once Burgess passed away, the house would be put on the market. We spent a week there, touring some of the area’s attractions like the Getty Museum, the La Brea Tarpits, the star walk on Hollywood Boulevard (we even found Burgess’s star) and hanging out on Venice Beach.

The following year, Burgess passed away and the home was eventually sold. After passing through a few millionaire’s hands, the house was purchased by Leonardo DiCaprio and completely remodeled.
Talk about your six degrees of separation: Back in the eighties, Leo’s father, George, was the distributor for the comic books I was doing for Rip Off Press. We used to hang with George and his family at the San Diego Comic Con, and were always entertained by George’s funny stories. Leo was still a youngster back then, before his meteoric climb to stardom. 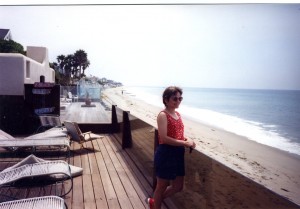 7 Responses to House For Sale