How To Start A War On The Cheap 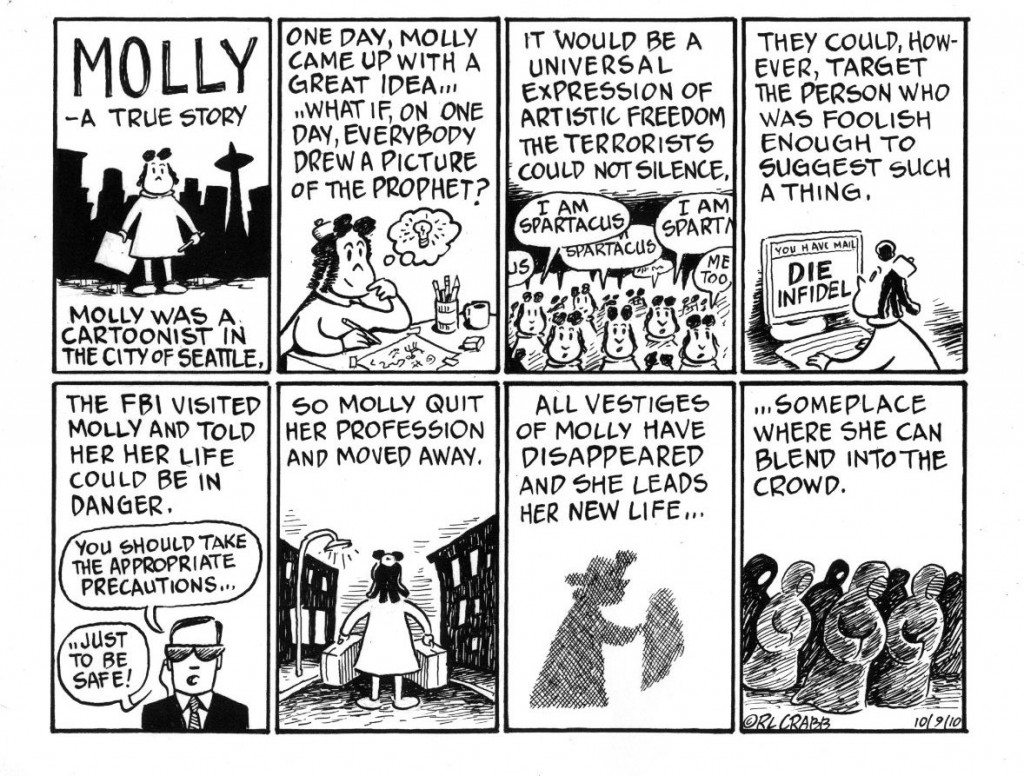 I did this cartoon about the story of Molly Norris a few years ago. Molly quite innocently (and naively) almost started a war by standing up for the 1st amendment. Once unleashed, her drawing turned into a Frankenstein’s monster that threatened her life and the lives of thousands around the globe. You can read the whole ugly story on this rather lengthy Wikipedia entry. http://en.wikipedia.org/wiki/Everybody_Draw_Mohammed_Day

There’s a lot of breast-beating and wild accusations running rampant on the internet today. The Obama administration is being spanked by the right-wing for allowing unwarranted attacks on our embassies and consulates in the mideast, and then apologizing for the offensive movie Innocence of Muslims . Mitt Romney is getting it from the left for suggesting we should come out with guns blazing. We gotta kill somebody. If we accidently hit some innocent goat herders, well, so what? The Arab world will get the message that we mean business. Just a typical day on the campaign trail of tears.

It reminded me of my August 17 post, Are You A Man Or A Mouse (Or A Pussy?) where I told the story of Dan O’Neill’s war on Walt Disney. Dan’s intentions were clear from the beginning: I’m calling you out, Mickey Mouse! Let’s rumble! The only expenses were some art supplies, a publisher willing to distribute a few thousand copies, and maybe a little money to feed the starving artists. Chump change.

Al Qaida runs on a fairly cheap budget as well. Osama Bin Laden started with a few million bucks, mainly to transport twenty malcontents to the U.S., enroll them in flying school, and a per diem to cover food, lodging, and some topless entertainment for their going away party.  He got the war he so desperately wanted.

Information is slowly coming to light about the mysterious producer of the movie that started the latest ruckus. It seems clear to me that this “Sam Bacile” character knew exactly how to incite a religious war, and judging from the production values on Innocence of Muslims, he did it with a bare-bones budget. He managed to snooker some hungry actors with a cover story about a desert adventure, then overdubbed their dialogue with the real script. Once doctored, the finished product was promoted by fellow zealots (like koran-burning Terry Jones) and foisted onto the public via internet in time for the 2012 elections. Let’s see Obama get out of this cliffhanger!

It’s too early to tell how well this scheme will work, but it will no doubt come back on the 1st amendment. There is already a tendency to shackle free expression by labeling it as hate speech, and there will always be those who abuse the right, intentionally or not. It’s already cost the lives of some brave Americans and sent a fleet to the Mediterranean. That’s not chump change.

45 Responses to How To Start A War On The Cheap