Inept Vs. Insane: Showdown At The KO Corral 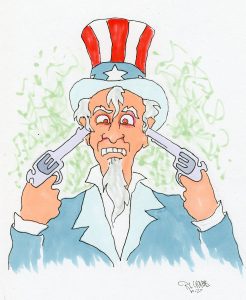 If you’ve been following my screeds here for the last twenty years or so, you know how I feel about our two party nightmare. It’s been a long, slow crawl to get to this sorry point in history, a slow motion suicide.

We kept hoping for that moment when Uncle Sam would recognize his malady and confront his schizophrenia while he was still somewhat coherent. Sadly, he only continues to feed his delusions.

And if anyone had any doubts about Sam’s sanity, the election of a narcissistic real estate tycoon to the oval office should have made it obvious.

But now, four years later, the Trumpublicans have doubled down on their madness. They are so terrified of the Democrats they are willing to reelect the orange thing, even as he babbles like a petulant third grader and changes cabinet members more than his underwear. It should be noted that most of those ex-employees are united in denouncing their slobbering boss, and so are all living ex-presidents. Even the dead George H.W. Forty-one is giving the rigor mortised middle finger to Donnie Chump.

The Trumpublicans only see it as evidence of the sinister satanic forces that have united to feed on their babies. I wish I was making that up, but the party faithful now dance to the tune of QAnon conspiracies, which have been embraced by their fearless leader. Armed militia thugs roam the streets in exhaust-spewing monster trucks, threatening politicians and promising to “stand by” until called upon to rain violence on disloyal. It reeks of fanatic fascism.

What of the loyal opposition? The Democrats struggle to show themselves as the rational remedy to Trumpublicanism, but they are plagued by their own radicals. The streets of the big cities are strewn with the fetid feces of homelessness and burning police cars. Weak-kneed Democrat mayors struggle  to pacify the mobs, only to be vilified, scorned and replaced by woke leftists who promise to hobble the police, if not replace them entirely, and confiscate the wealth and property of the capitalist pig corporations.

That has led to a massive exodus to the imagined safety of the hinterlands, where real estate is still cheap enough for the well to do, even with the astronomical insurance rates.

And so the Great Divide widens. What’s a voter supposed to do when confronted with these choices?

Joe Biden managed to wrest the nomination from socialist Bernie Sanders, and promises to run as a centrist who can work with reasonable Republicans. It sounds good on paper, but can the party keep the radicals at bay for long? Do they even want to?

All this loose talk about adding more judges to the Supremes and adding more states to cement a permanent majority rule will only weaken the Republic in the long run. Any such schemes are dependent on the “blue wave” and then actually achieving unity within the party. Sometimes the Dems can be their own worst enemies.

On the other hand, President Tweeterpie  bloviates daily on his hatred  for anyone or any policy left of Attila the Hun. The nation will not survive December, let alone another four years with an unfettered sociopath at the helm.

He’s made his mark. His judges will influence policy long after his descent into the nether regions. He will inspire others to follow his trash-talking style of politics. It will take years to rebuild the institutions he’s wantonly wrecked.

You’ve earned a rest, Donnie, and I’ll vote to give it to you. 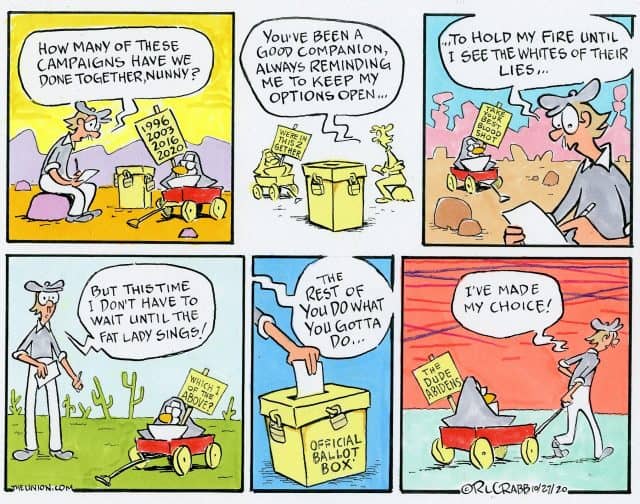 Like Loading...
This entry was posted in Culture, History, Inept vs. Insane, Nun Of The Above 2016-20, Politics. Bookmark the permalink.

2 Responses to Inept Vs. Insane: Showdown At The KO Corral