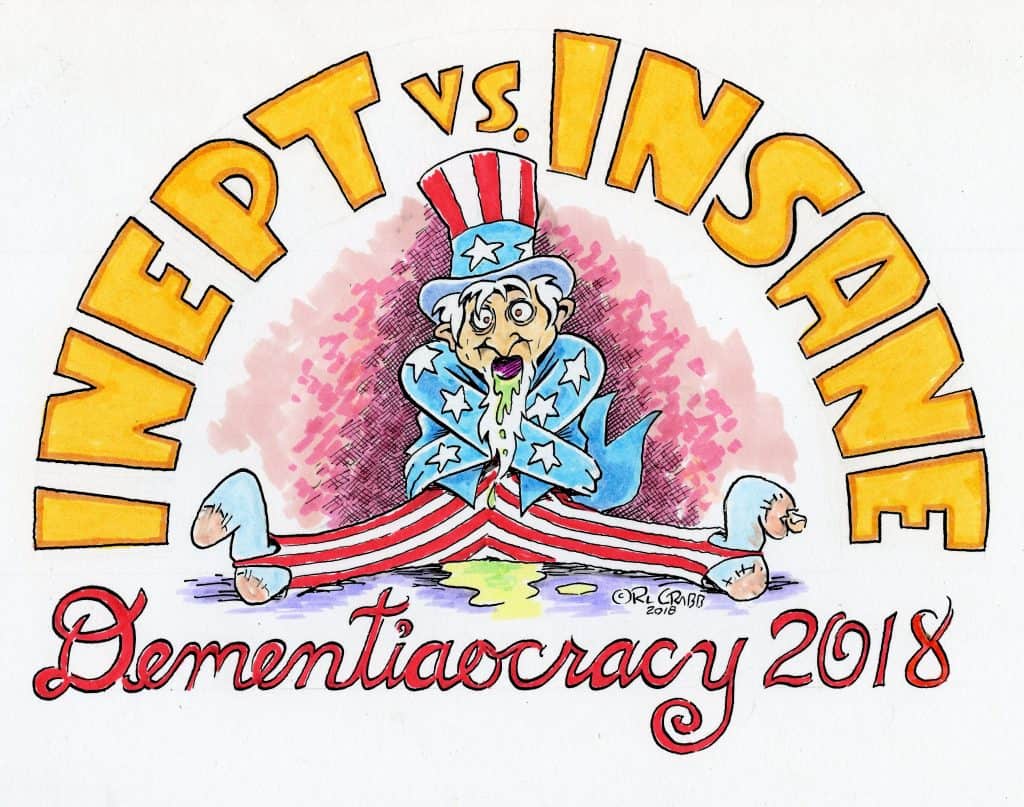 Welcome to 2018. Now that the dust has settled from the first year of the Trump presidency, it’s time to look ahead at what kind of year we can expect in the coming months.

“The Great Divide” has shown no sign of closing the ideological gap between progressives and conservatives. If anything, it’s likely to become even more pronounced as Republicans and Democrats joust for control of Congress in the midterm elections. There will be much swearing and bloodletting. Shield your children.

The Republicans base is unlikely to falter in their support of Trump, and why should they? After all, he is the first Republican president to actually do the things that the far right has been harping on since the Reagan years. He’s slashed regulations, put a reliably right wing ideologue on the Supreme Court, crippled the Affordable Care Act, told the Iranians and North Koreans to go fuck themselves, told the United Nations that they can either support us or shut up if they want any funding from Washington, and he personally challenges the news media 24/7.

And at the last moment, he and his sometimes allies in the Congress passed sweeping tax reductions, proving that it is possible to herd cats when it is in the cats’ interest. (That interest being the slim majorities they will rely on to continue bleeding the bog.) Historical evidence suggests the controlling party will be ousted, but then, conventional wisdom said Hillary would trounce the Trumpster in 2016.

Democrats now find themselves in the unenviable position of talking down the economy, which will only work if the economy is worse by the end of summer. Will the corporations follow the program and dump billions into jobs and higher wages? A few have, so far, but there will need to be much more if the oligarchs want to avoid the slings and arrows aimed at their outrageous fortunes.

It appears the next big battle will be funding infrastructure. The Donald has thrown down the gauntlet to make the effort a bipartisan labor of love, but it will likely break down on party lines. Any Democrat that even dares to look at compromise will be skinned alive by the fanatic base as a warning to others.

Then there is the ongoing media onslaught. By the end of 2017, the partisan divide between Fox News and MSNBC/CNN reached a fever pitch, with pundits barely able to hide the foam sputtering from their quaking lips. Partisan hacks with bulging eyeballs and hearts full of hate will cite party-funded studies and skewed polls to the eager believers. Likewise, Twitter and Facebook are overflowing with half-baked, half-faked posts accusing the enemies of civilization of every conceivable crime known to humankind.

We have become a nation of schizophrenics; multiple personalities unable to reconcile our differences and unwilling to seek treatment. E Pluribus Fuck’em. Winning is all that matters, and governing seesaws from one extreme to the other and back again.

Even truckloads of opiates can’t dull the national pain. As the government safety net is dismantled, Republicans will seek to divert public health to the churches, in the hope of converting the diseased to the proper religion for salvation. This is their plan to bring the nation back to its glory days. History will be sanitized in their own version of political correctness. (The Indians should be happy we white people saved them from their primitive lifestyle!)

Meanwhile, progressives are tightening their stranglehold on the west coast, with California in the lead. Even so, the Democratic party is sharply divided between the pragmatists and the hardcore Bernie-bots.

In the coming months, this column will strive to make sense of it all, and continue to look for some ray of hope that sanity will prevail upon “the last best hope of mankind on earth.” This cannot occur unless both sides get off their high horses and find common ground instead of drawing lines in it. Impossible? America’s always been about doing the impossible.