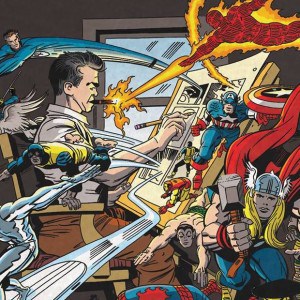 Back in the waning days of 1963, I was looking over the comics selection at Williams’ Stationary in Grass Valley. I hadn’t been keeping up with comic books much, the DC brand was too juvenile for my 12 year old tastes. I would occasionally pick up the monster comics like Tales To Astonish or maybe the Dell adaptations of The Twilight Zone or Thriller, but there were few titles that kept my interest.

That was, until the day I saw the new issue of Strange Tales featuring the Human Torch. I had never heard of the Torch before and was eager to find out what he was all about. As I read through the story, the Torch mentioned he learned his fighting skills from the Thing and Mr. Fantastic. The Thing?!…Mr. Fantastic?!… Just the names made me want to see more. A few weeks later, I finally found my first issue of Fantastic Four. It was number 21, featuring the Hate Monger, who looked like a purple version of the Ku Klux Klan and turned out to be Hitler.

I was hooked. As time went by, I was introduced to Thor, The Incredible Hulk, The Avengers, Spider Man and their offshoots, but the FF was the flagship, proudly announcing on the masthead; The World’s Greatest Comic Magazine. Every issue introduced characters even more fantastic than the last, be it the Watcher recording the events of the human race from the mysterious blue zone on the moon, the latest plan for world conquest by Dr. Doom, Black Bolt and the Inhumans, or the coming of Galactus and his chrome-plated herald, the Silver Surfer.

And as anybody who is half awake knows, they were the children of Jack Kirby. (Yeah, and Stan Lee, but I believe most of the creative characters came out of Kirby’s vast imagination. Stan’s gift was making the stories and dialogue flow.)

I can’t tell you how much those amazing comics inspired me, and many others. The evidence can be seen in movie theaters all over the world fifty years after the twelve cent comics first appeared on the racks.

Eventually, my tastes changed. Robert Crumb and Dan O’Neill took me in another, even more mind-boggling direction of what was possible with a dip pen and a bottle of India ink. Politics became my beat, a world that is more absurd than any comic book.

But it was Jack who jump-started my imagination and my life long obsession with the medium. He would have been ninety-eight years old today. His legacy is his contribution to our collective mythology. Long live the King.