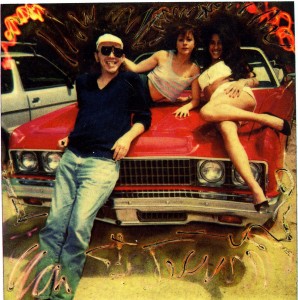 At your right is a photo taken of me in 1990. Behind me are Gigi and Roxi, two strippers from the Mitchell Brothers’ O’Farrell Theatre in San Francisco. We are adorning a replica of The Great Red Shark made famous by the writing of Hunter S. Thompson, the godfather of gonzo journalism. We were in Woody Creek, Colorado in support of Hunter as he battled the authorities on a variety of charges, including assault, drugs and weapons.

Although we didn’t realize it at the time, we were also battling to survive our reputations and lifestyle. The RL Crabb you see here is at the tail end of a twenty-five year binge. Like so many of my generation, I dove head first into the cultural revolution of the sixties. I idolized  guys like Hunter, whose drug-fueled adventures in Las Vegas and on the campaign trail inspired many to emulate his indulgences.

By the time we landed in Woody Creek, the inspiration had become just a routine habit, and it was slowly killing us. Running with an outlaw gang like the Brothers was like running with the James Gang, and we all know how that story ended. Fortunately, we didn’t end up in some quixotic showdown with the police. The charges against Hunter were dropped, and we limped home to California. It would be the last time the gang rode together.

A year later, Jim Mitchell shot and killed his brother. Artie had become a liability, constantly drunk and drugged, careening around the City with a gun and threatening anyone who got in his way. Sane people would have thrown a net over him and sent him to rehab, but things had gone too far by that point. Jim managed to get off with a seven year sentence, and only served three, but he was never the same. The Brothers were joined at the hip, and without Artie, Jim withered and eventually died of a heart attack while watching TV at home.

Hunter went on to write more books, but never found his voice again. It was as if the muse had grown tired of being abused and filed for divorce. The stuff Hunter was writing sounded more like a sad imitation of the Hunter S. Thompson who caroused with the Washington elite and wrote so eloquently about the death of the American Dream. Perhaps he knew that. And maybe he decided that his self-inflicted death was preferable to the slow decay of age. He couldn’t live up to his image anymore.

Back in the eighties, we used to mock Nancy Reagan and her “Just Say No” campaign. We were too cool for that square stuff. And the Reagan’s generation wasn’t much better. Every guy wanted to be like John Wayne; hard drinking and hard fighting. But the real John Wayne was a swaggering mean drunk who died before his time. Just as we had our Jimi Hendrix, Janis Joplin, Jim Morrison, and Jerry Garcia, the Greatest Generation had their Errol Flynn, John Barrymore, and Marilyn Monroe. I can’t tell you how many adults I knew growing up who were hardcore alcoholics.

So it was encouraging to see President Obama on the TV yesterday talking to young black America about choices. He readily admitted to the mistakes he made with drugs in his youth. He inhaled, just like the rest of us, but managed to overcome the impulse to wallow in the behavioral sink. He went on to bigger things, and they can too if they resist the siren call of being “cool”.

It’s been twenty-four years since I gave up hard drugs and alcohol as a lifestyle, and they’ve been the best years of my life. I traded outlaws for in-laws and produced my best work as a cartoonist. Soon I hope to unveil the final chapter of my chronicle of the crazy years, not to glorify them, but to serve as a warning. Maybe I should market it as a “how not to” book.

15 Responses to Just Say No