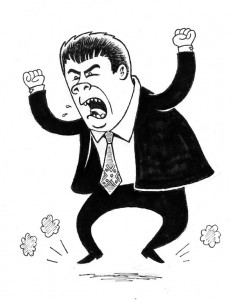 I watch a lot of cable news. It’s a crummy job, but I have to endure it for professional reasons. During the week, my main sources are Fox and MSNBC, and on weekends I like to watch Book TV on CSPAN II. I watch CNN when I want to go to sleep.

Fox and MSNBC usually have a few good programs. There are times when I can find stories on either channel that are under reported or ignored by the rest of mainstream broadcasting. On the other hand, both are well known purveyors of propaganda for their respective ideologies. There’s enough bullshit spewing from their mouths to fertilize the Sahara Desert.

Today my pet peeve is with Sean Hannity, whose lopsided lie factory I rarely watch, but I wanted to see how he was going to handle the now-famous Obama handshake with Raul Castro. I must say his bile exceeded my expectations. He was nose-deep on the bullshit meter.

As he usually does, Hannity brought on some hapless Democrat hack to rip apart, repeatedly interrupting him to denounce the president as a traitor. Then he’d throw up images of Big O bowing before the Saudis and taking a book from the late Hugo Chavez, while jabbering like a spastic baboon about freedom and mom’s apple pie. I wanted to crawl into the TV and kick him in the nuts.

As anyone who is halfway aware of current events knows, the handshake took place at the funeral services for Nelson Mandela, the political prisoner who went on to become the president of South Africa. The Republican spinmeisters want to talk about anything but that sorry episode of their history, but I remember it well.

Back in 1977, I was watching the Reverend Pat Robertson’s 700 Club on the tube. Pat rolled out a big map of South Africa and pointed to areas where “strategic metals” were being mined. That was a good enough reason to support the apartheid white minority government, to keep those assets out of the hands of the black commies. It was a shocking thing to see, after the civil rights battles we in the US had concluded only ten years earlier.

It only got worse after Reagan got elected. The racist wing of the party was in full flower, and the biggest cheerleaders were Robertson and Jerry Falwell. To be sure, there were a few brave Republicans who remembered they were from the party of Lincoln, but there were too many others (including Dick Cheney and William F. Buckley)  who perpetuated the notion that the natives were incapable of democracy. Congress had to override Dutch’s veto to get any sanctions against the Afrikaner Nationalists.

And as for shaking hands with criminal scum despots, Reagan’s hands would never come clean. I even clipped a photo of Ronnie and Nicaraguan leader Daniel Ortega out of the newspaper and pasted in thought balloons of what they really thought of each other. (Reagan: “Commie bastard!” Ortega: “Capitalist asshole!”) And while he was telling Mickey Gorbachev to “tear down that wall” he was still trying to prop up murderers like Ferdie Marcos and Gus Pinochet.

It’s an old wound that the current GOP is still trying to heal. The establishment knows how badly they need minority voters if they ever hope to become a working majority again, so you get Charlie Krauthammer comparing Mandela to George Washington. I’m sure that made some Tea Party hardliners climb the walls.

If you believe in Heaven, you can be sure that Saint Peter is swinging open the gates for Nelson Mandela, a man who had all the reason in this mortal world to hate his oppressors, and yet he rose above it.

And if you believe in hell, there is a special place there for creeps like Jerry Falwell, who is no doubt toiling in Ol’ Scratch’s diamond mines, located deep in the sewers of the underworld. 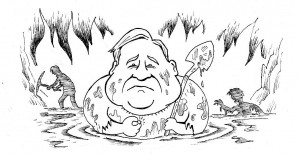