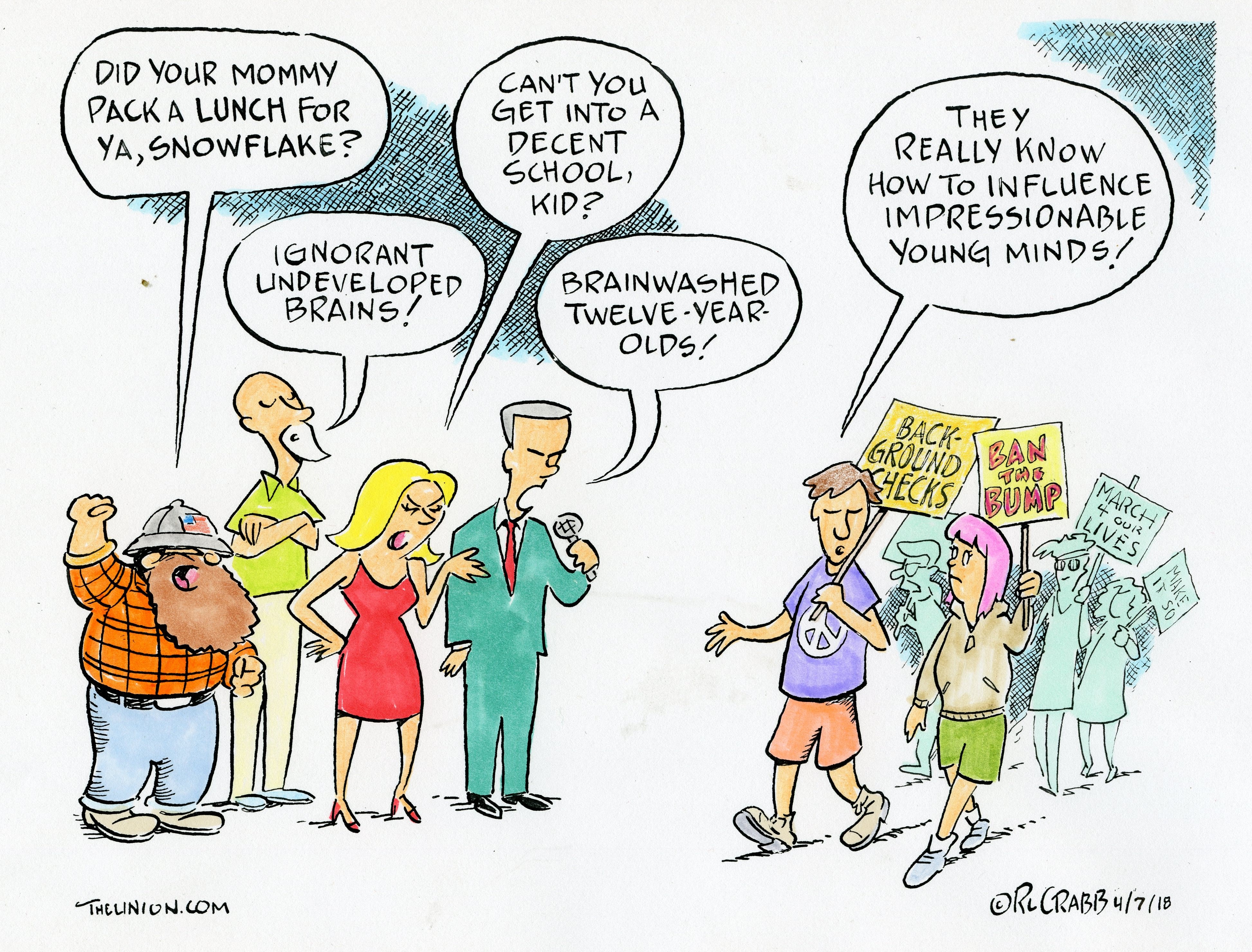 Conservatives are constantly bemoaning the state of schools and and the young folks that inhabit them. “It’s the unions,” they cry. “If we only had school choice we could indoctrinate the youth of America 0ur way!” Gut the public schools once and for all, if Betsy DeVos and the religious right get their way.

One wonders why there aren’t enough conservative teachers in the system to balance the liberal brainwashing that has infected generations of our youth?

Could it be that teaching doesn’t pay well enough to attract a more diverse cross section of the citizenry, or that teachers have to work well past the school day preparing lessons and grading the papers of their overcrowded classes? Or that many are paying for school materials out of their own pocket? Don’t they get three months off every summer? The ungrateful wretches!

There are big problems with public schools. Funding never seems to cover maintaining the infrastructure, new books, and administration eats up too much of the budget. Many teachers tell me the biggest problem they have with student discipline is the parents, who refuse to believe their little darlings are capable of antisocial behavior.

But then, when a real teachable moment like a school shooting massacre comes along, where are the conservative voices? Throwing insults and name calling, mostly. David Hogg is referred to as “piglet.” He’s berated for not having the smarts to get into the right school. The rest of the thousands protesting are labeled as stupid, ignorant, brainwashed sheep who couldn’t even find their way to Washington without the help of their shepherd handler adults.

They grouse about the “kiddies” emotional response, but nod in agreement when Wayne LaPierre goes ballistic, looking like the kind of spastic nutcase who might be deemed too mentally unstable to wield a weapon in any properly organized society.

And of course, they trot out statistics that prove school shooters are less likely to perforate your classroom than a random lightning bolt landing in your lap, but who wants to be the next random statistic? Russian roulette, anyone?

It was only seventeen years ago that a mentally disturbed fellow with an arsenal shot up the HEW building in Nevada City, killing two there and then going on to kill another at the local Lyon’s restaurant. At the time, I lived a stone’s throw away from HEW and frequented Lyon’s regularly, so the odds say I should not have to worry about being anywhere near the next shootout. I can’t tell you how relieved I am.

The shooter’s brother, a law enforcement officer himself, knew his sibling had mental issues, but didn’t do anything until it was too late. A recent local case where a man with dementia killed his caregiver is another example. At some point, there needs to be intervention.

Background checks are an imperfect solution and communication between law enforcement entities needs to improve, as the recent event at YouTube HQ has proven, but it’s better than any knee jerk attempt to ban guns, or make owning one too expensive for the average person. Unlike John Paul Stevens, I want to keep the right to bear arms.

Yeah, that’s right. I believe sane people should be able to protect themselves. And as unpopular as it may be with some, I believe schools should have an armed guard on campus at all times. Preferably, not a teacher. It’s a sad reality, but one that needs to be addressed. The kids are right to say “enough!”

Those kids may have a lot to learn about guns and life in general, but they’ll learn much quicker if given some respect by their elders. It’s a choice conservatives have to confront if they don’t want to alienate another generation of future voters.