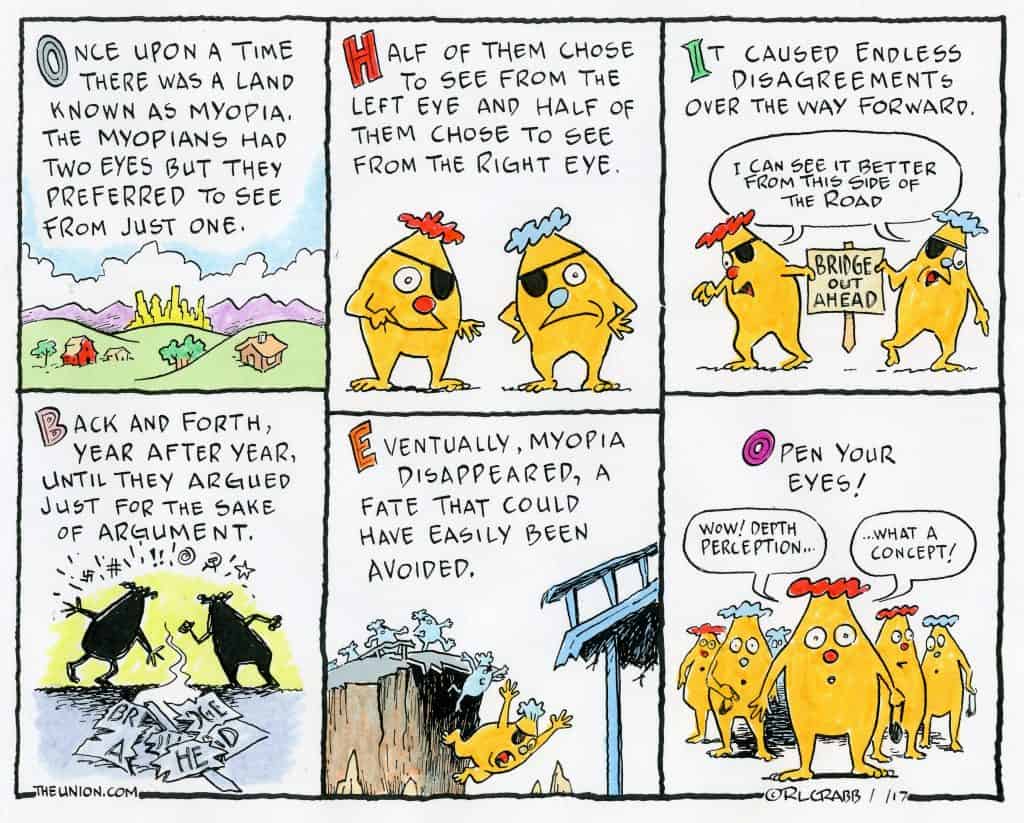 This has become a recurring theme in my cartoons for the last twenty years, and sadly, the disease of ideological myopia has only become worse. I see that this latest entry is already being mocked over at Rebane’s Ruminations. I’m not surprised. George and his friends have been doing their endless circle jerk for years on end, now emboldened by the regressive policies of the Trump juggernaut. I’ve long since abandoned any hope of dialog with that snarky crew.

Likewise, progressive California has doubled down on their efforts to make sure that any tax cuts on the federal level will be more than compensated by free-for-all government programs and massive infrastructure pay-offs for favored districts. Never mind the looming pension debt or the inevitability of economic downturns.

I spend most of my mornings switching channels between Fox Business and MSNBC. How two news outlets can interpret events so radically different never ceases to amaze me. It is with some degree of difficulty that the truth can be found between the lines.

At some point, the United States will cease to exist as we now know it, because there is no way to reconcile such diverse ideologies. A house divided cannot stand, ya know.

Meanwhile, lesser powers rejoice at our impending divorce. We will spend more time and energy fighting each other than worrying about what goes on beyond our walled borders. Anyone who believes that they won’t take advantage of the situation doesn’t know much about history.

And I suppose I will be mocked endlessly by the geniuses of the left and right because I refuse to see the error of my ways, and that we could have gone on to achieve greatness if only we could have played to our strengths rather than our weakness.

George is right. It would be too simple.