In his latest “scoop”, Scoopy has accused me of colluding with “the powers that be” in Grass Valley. Thanks for the heads up, Bubba. I’m always on the lookout for a scandal, and being that I’m involved in it, it should be easy to uncover.

Problem is, I can’t seem to find any big story in my hometown. What would it be? Is it yesterday’s lettuce over the campaign signs above the Chamber of Commerce? Is it that Keoni Allen doesn’t like Jim Firth? Was it the secret agreement that allowed Dollar General to be slipped into the Brunswick basin without the elitist liberals approval? 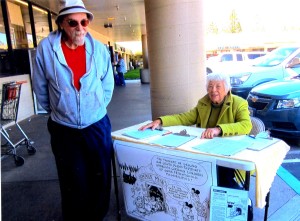 Here’s a photo of me when I signed up to protest the proposed closing of Empire Mine State Park, which was a pretty big story in Grass Valley. As I recall I did at least two cartoons on that one. Of course, it didn’t involve bashing any locals, so in Scoopy’s eyes it probably doesn’t count.

Then there’s this photo of the St. Piran’s day scandal, when one irate citizen pointed out that it was a crime to feed pasties to dogs (after the pastie throwing contest) when there are homeless people starving. That one was diffused when it was revealed that the pastie filling was actually dogfood.

I’ve always been critical of Nevada City’s attitude toward its downstream neighbor. The Queen of the Northern Mines is famous for shuttling all the unsightly conveniences to “gaudy gulch” or the hated Raley’s shopping center. Never mind that they freely spend their money there when they can’t buy an aspirin in Nevada City.

The truth is, Grass Valley politics tend to be boring. They aren’t whining about street lights. They actually have elections for city council instead of having elites pick out puppets. So far, they have managed to keep their fiscal head above water, although that could become a problem in the years ahead. I’ve had city council members ask me when they will appear in my comics. I keep telling them; do something stupid. I never cut John Spencer any slack. Terry Lamphier never caused much controversy, at least until this week. Dan Miller will get his chance in January.

When it comes to ignoring a good scandal, Scoopy is a champ. This year saw, not one, not two, but three Democratic state senators involved in criminal activity. Not a peep from the guy who spent most of the last few election cycles whipping on Republican lawmakers and Tea Party officials for blatant acts of stupidity and criminality. Scoopy’s a shill for the Dems, make no mistake about it. Oh yeah, he’s voted for a Republican once or twice, but only when the deck was stacked and the outcome was never in doubt. The real story is Scoopy’s sick obsession with The Union. He’s never forgiven the rubes for canning his ass and now he’s transferred his hatred of former publisher Jeff Ackerman to new publisher Jim Hemig. As he likes to say, “the politics are so nasty because the stakes are so small.”

And during the last two election cycles, Scoopy was content to have Nevada City’s “good ol’ boys” hand pick the city council without an election. And he has the gonads to criticize my coverage?  I will admit that I favor Nevada City, even though I don’t live there anymore. Judging from this photo from city hall, they have been paying attention.  I don’t see any pictures of Scoopy, but if they need one for their dart board, I will happily supply it.

1 Response to The Latest Non-story