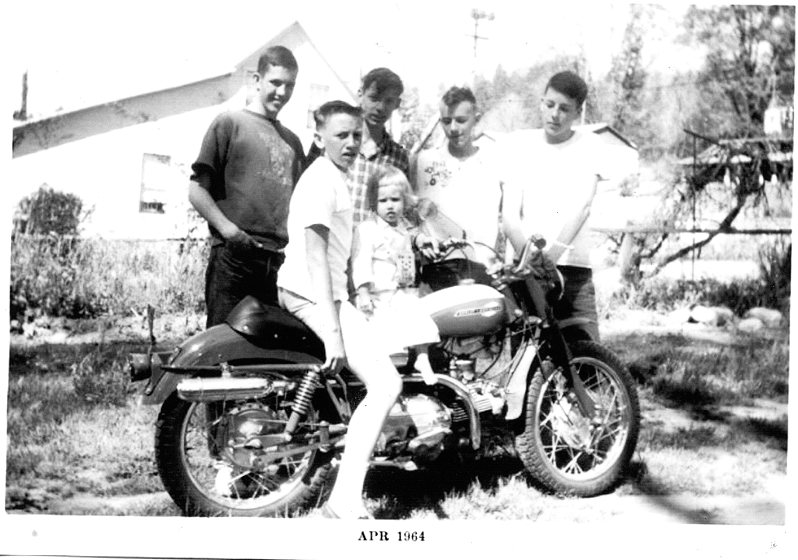 As I’ve mentioned here before, I live in the house I grew up in on Mill Street in Grass Valley. I left in June of ’69 after graduating from high school and wandered the backroads “to search for America” as Paul Simon once put it, for the next thirty five years. After Dad passed away Mary Ann and I moved in and continue to try to keep the old homestead from falling down.

The neighborhood has been changing since we returned. This last week, Joe Rivera, who lived across the street in a house he built himself back in the fifties, passed away. Up the street, it appears that the last holdout from the twentieth century, Erma Kistle, has left her residence. I’ve noticed a lot of activity up there in the last month, but wasn’t sure what was up until I received this photo from Andy Cassano in today’s mail, along with a note saying that one of the kids found it while they were cleaning out the house.

This sure brings back some memories. Pictured are my old gang; (from left to right) Tom Lott, Ron Kistle, (I assume that’s his little sister on his knee) Pete Prichard, me, and Dave Lott. The motorcycle, a Harley Davidson Sprint H, belonged to Pete. He was the first on the block to get wheels, and he let all of us have a turn at riding it. Of course, I immediately dumped it and ripped a gash in my leg, but such minor injuries never stopped us from getting back in the saddle. Within a few years everyone had some kind of cycle, and we had one of the oddest looking motorcycle gangs you’ve ever seen. Pete on his Italian-made Harley, Dave on his Allstate 150, (You bought them through the Sears catalog) a few Honda 50’s and a pair of Vespa motor scooters. We terrorized the ‘hood, mostly with noise.

So the last of the Depression era residents are gone now, and us baby boomers are the old timers. A new generation is moving in, young families with kids mostly, and they’re sprucing up the old houses and breathing new life and new sounds up and down the old street. Life goes on.

13 Responses to The Mill St. Gang