(Note: I’m running this one again for my thin-skinned conservative friends who seem to think they deserve a free ride because their guy won. Ha. Ha. Ha.) With the terrorist attack in Paris that has claimed the lives of five cartoonists still fresh in the minds of the public, I’d like to take the opportunity to refresh our collective memory on this lowbrow profession. Yes, it is true that we sometimes aim for the lowest common denominator when poking our leaders and institutions. It’s been that way since the first caveman took a burnt stick and etched the chief of his tribe with an exaggerated butt on the cave wall. He was encouraged when he got a few laughs from his buddies, (especially the women) but no doubt had the burning stick shoved up his ass after the head honcho got a look at it.

It didn’t matter. There was always another fool waiting to take his place. As soon as the first wall of civilization went up, it was covered with graffiti. With the coming of the printing press, cartooning became mobile, no longer weighed down by heavy stones or wooden planks. It was still a labor intensive task. The original drawing had to be etched by hand onto the plate for printing, and although it was performed by skilled craftsmen the subject matter was still aimed at the nether regions. 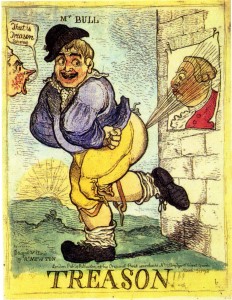 This crude caricature of King George III was penned by Richard Newton, whose cartooning career lasted only seven years at the time of his death at age twenty-one. William Pitt the younger was the King’s prime minister and chief henchman.  The year this cartoon appeared (1798) was marked by an unsuccessful rebellion in Ireland and the growing fear of invasion from France. It was not a good time for “John Bull” to be farting in the monarch’s face. At a time when the jails were filled with radicals, Newton was fortunate to escape prosecution. 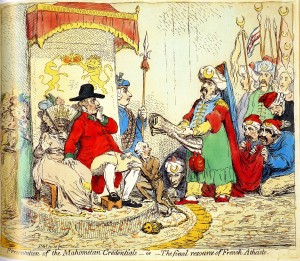 In our own country, there have been many attempts to intimidate journalists and cartoonists. After years of being bought off by the Southern Pacific Railroad, California newspapers were discovering that there was more profit in attacking the monopoly than taking its bribes. Led by William Randoph Hearst’s Examiner and The San Francisco Call, the railroad and their lackeys in the legislature were targeted for their corruption and cronyism. Every day, the crusading papers carried unflattering caricatures of politicians kowtowing to SP’s William Herrin. After a cartoon picturing a long-forgotten forgery by Assemblyman Grove Johnson caused the politician to break down in tears on the assembly floor, angry legislators drew up several bills intended to curb the power of the press.

The signature bill required reporters to sign their names to any articles they wrote that “might blacken the name of anyone living or dead.” Another made it easier to prosecute a libel suit. A third bill, now get this… made the crime of killing a newspaperman who had libeled a citizen justifiable homicide.

The capstone of the package was the anti-cartoon bill, which prohibited a newspaper from publishing any picture of a living Californian without his written consent, unless the person was a convicted criminal. It also banned cartoons that reflected negatively on the honor, integrity, manhood, virtue, reputation or business or political motives of any individual.

Goaded by SP and riding a wave of sympathy for the humiliated Johnson, the cartoon bill easily passed both houses of the legislature and was signed into law by Governor Henry T. Gage. After tempers cooled, the bill was forgotten, and would have never passed scrutiny by the courts anyway. It was quietly repealed in 1915. The final irony was that Grove Johnson’s son, Hiram, led the progressive movement that would finally end the railroad’s power in California.

The real heroes today are the cartoonists, writers and musicians who live in oppressive countries, be it Putin’s Russia, North Korea or the Islamic nations. What is it that would lead a person to risk his life to draw a despot in a compromising position, just to get a laugh? It is something buried deep in our pysche that refuses to conform or be controlled. If we truly have a sixth sense, it is the sense of humor. The one thing that oppressors despise above all is laughter, because laughter is the killer of fear.