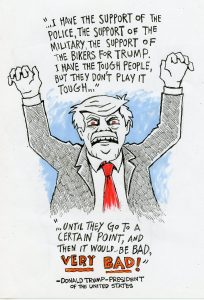 I’ve covered every president since Jimmy Carter, and I have never seen the level of vitriol from any one of them like the utterings of our current Fearless Leader. Even Nixon kept his nastiness off of the public airwaves, at least until his tapes were released.

It’s the same with Boss Tweet’s threats to “investigate” Saturday Night Live. All the previous targets have taken the ribbing in stride. It’s the tradition of the American free press, and has been since the day the Republic was born.

At least he writes all the material for us.