Vote For Nun Of The Above!!! 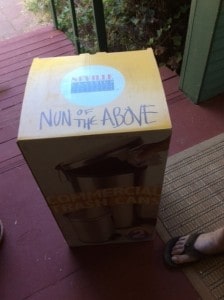 Way, way back in the dark ages of the nineteen-nineties, I created a candidate to run in the presidential sweepstakes of 1996. The main players were Bill Clinton, Bob Dole and Ross Perot. I wasn’t particularly impressed with any of them, so Nun of the Above was born and appeared in my daily comic strip Roadskill being pulled down the campaign road on a cart by Earl Squirrel. We had some fun with the concept, but due to a lack of funding and poor publicity, Nunny was defeated. 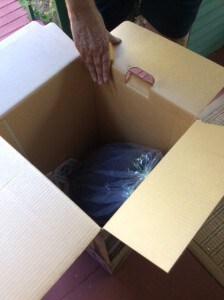 Moving on into the 21st Century, Californians were fed up with the dysfunctional state government, and in particular, Governor Gray Davis. A recall petition got enough signatures to warrant a special election, and due to the arcane election rules, almost anyone could qualify to be on the ballot. I almost succumbed to the temptation myself, but at the time I was caring for my ailing elderly father and couldn’t take the time to travel the thousand mile length of California in search of votes. 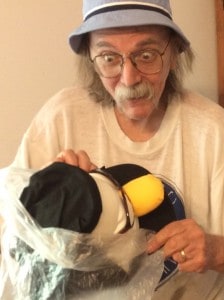 Undaunted, I went to work in my  studio, fashioning my former creation from a two-dimensional character into a something that could physically transcend the comics page. Using some chicken wire and paper mache, Nunny took on a solid form. I then resurrected  her in the weekly adventures of It Takes A Village Idiot. It was one hell of a ride. Over three hundred Californians took the leap into the cesspool of politics. Despite our valiant efforts, we simply could not compete with the horde of wannabes and the Hollywood star power of the eventual victor, Arnold Schwarzenegger. Nunny went into storage in the basement with all the other relics and failed experiments of my past. 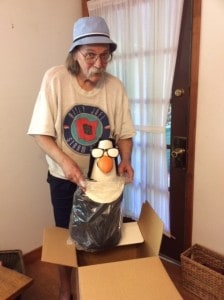 But now, twenty years after her first appearance, Nunny has come out of her cardboard exile. Her original mission and message has finally taken hold in the upcoming election of 2016. Voters are fed up with the generic candidates churned out by decrepit two party system. Clinton? Bush? Been there. Done that. The nation cries out for a candidate with no experience in elective office; someone who can resist the pesky judges, lawyers and monied special interests. Nun of the Above can never be bought and sold. By her silence, she can never lie. She owns no business and has no relatives in commerce or politics.

Now some may see her as a religious figure, but her antiquated attire serves only to distinguish her from the rest of the flock. It is not meant as a dog whistle, micro-aggressive slight on anyone’s faith. If Nunny has any beliefs, she keeps them to herself.

Of course, there will be questions. Of what use is an elected leader who is capable of nothing? Are you out of your f*ing mind?  Rest assured, dear reader, there will be answers in the days and months ahead. Let’s roll.

(Look for Nun of the Above in this space or on Facebook or the editorial pages of The Union as the campaign progresses.)

Like Loading...
This entry was posted in Culture, History, Nun Of The Above 2016-20, Politics. Bookmark the permalink.

1 Response to Vote For Nun Of The Above!!!