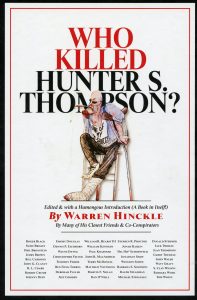 I just received my advance copy of the late Warren Hinckle’s magnum opus on the also late Hunter S. Thompson. It’s a massive tome, and I have forty pages of comics and commentary along side such luminaries as Johnny Depp, Robert Crumb, William Randolph Hearst III, Paul Krassner, Tom Wolfe, Ralph Steadman, Garry Trudeau and a host of others.

I’m told the bulk of the printing will be arriving in San Francisco from China in a bombproof shipping container strapped to the back of a killer whale sometime after Thanksgiving. I’ll let you know when it will be available for purchase.