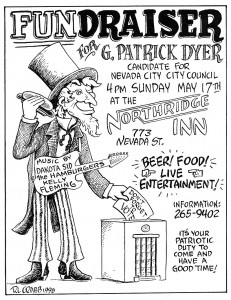 I don’t live in Nevada City anymore, but thirty of my sixty-three years were spent in and around The Queen OF The Northern Mines. And before I started covering politics full time, I used to endorse candidates for city council. Elections used to be quite normal in the NC, back when they had such things.

These days it’s difficult to find enough candidates to fill a ballot. Last time, for the first time in living memory, the city passed on voting and just gave the job to the only two people interested in applying. Sad.

“Back in my day,” as we old timers like to say, “you had to show your stuff to win a seat at city hall.” Having five or more candidates was standard, and sometimes there were as many as seven. The issues were much the same then as now. Growth versus no-growth…Adherence to the Holy Historic Ordinance…Fixing potholes, although there were some who wanted to keep the streets impassible to ward off auto traffic. You could count on every candidate knocking on your door. 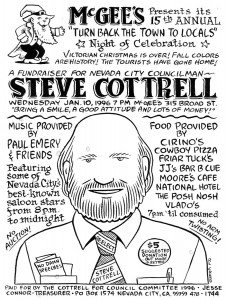 And we had parties! People actually spent money to get elected. There were mailers and posters and buttons courtesy of the Button Works. And when it all came down to election night, the winners would usually squeak by with two or three votes.

So I find it strange that in a town of three thousand people with five thousand opinions that they can’t muster up a decent horse race. Considering the number of activists and lawyers in the tiny burg, you’d think they’d be chomping on the bit to have the opportunity to serve their community.

And it’s not like there aren’t any issues. After seeing all the name-calling and general vitriol over the wooden deck on Facebook, it’s clear that there is more than one viewpoint on which future direction the NC should take.

So I hope to see some more faces out there this time, and time’s a’wastin’. Only a few days left to dive in the pool. (And who knows, you might end up in a cartoon!)

26 Responses to Will Nevada City Pass On Elections Again?