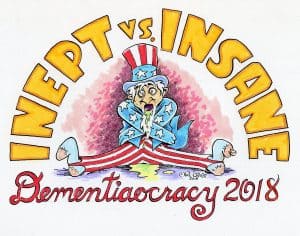 I spent most of this afternoon watching the reaction to the eagerly awaited (by some, anyway) Nunes Memo. Back and forth, MSNBC to FOX to CNN and back again. If anyone ever needed more evidence of the psychosis paralyzing this once sane nation, today would be exhibit one.

It has come down to whose spin will be believed by those undecideds. The advantage belongs to the Republicans at the moment, since they were able to get their version of events out first. The Democrats were left to twist in the wind, and the Federal B.I. has been made to appear as willing agents of the Clinton campaign. By the time the Democrat’s official response goes public, the damage will be done.

And the worst part of this sorry episode will be the loss of trust in both parties. Gone are the days when you could count on healthy skepticism from moderates. That was apparent during the State of the Union, when Nancy Pelosi kept turning her icy stare towards any Democrat who might even think about applauding anything Trump. There is a special hell closet office in the dark dungeons below the capital for any who waver in their loyalty to Mother of the Minority. 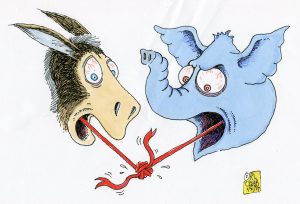 Likewise with the GOP. There wasn’t one Republican in the room who would admit their fearless leader uttered the now-famous “shithole country” slander. Even Lindsey Graham held his tongue, but left little doubt that the words had indeed been spoken. Those who still retain a shred of integrity are leaving the capital in droves, leaving the party to the worst dregs of the radical right.

Who can believe anything these creatures say or do? It’s all gamesmanship and winning all the marbles. How long can a nation this divided last before it begins to physically unravel?

Only John McCain dared to say what many believe: the only winner here was Vladimir Putin.