Well, it looks like 2014 is almost history, and good riddance, says I. It’s not that it was a particularly bad year, as years go. No, the only noteworthy thing about 2014 was an overbearing repetition of rhetoric; the unyielding temptation to continue fighting the same battles over and over ad infinitum. This has been especially true here in Nevada County Blogdom, notably on the Sierra Foothill Report and the Sierra Dragon’s Breath.  When I looked at the stuff that was being posted a few days before Christmas, it inspired my cartoon of 12/22. If you bother to read those blogs you know what I mean.

Being a cartoonist who opines on the human condition, the ongoing diatribes of the two blogs in question have been fertile ground for me. Hardly a day goes by without one or the other hurling insults into the ether. You’d hardly believe that one is an award-winning journalist and the other a former county supervisor. 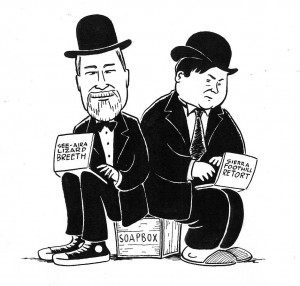 It’s the kind of stuff  you usually see on an elementary school playground; the dumb jock and the nerdy fat kid in the eternal struggle to look cool and save face in front of your peers.

After I posted my “Yule Blog” cartoon, I went back to Christmas business and ignored the blogs for a week. It was nice, like a breath of fresh air. Until today, anyway, when I saw Scoopy’s latest account of how he saved me from the wolves.

This is not the first time he’s told this story. If it really matters to anyone, you could dig through his archives and find two or three similar posts and comments. I’m not going there, but I will say what I’ve said many times before. Yeah, Scoopy stood up for me when the evil paper-pushing accountants wanted to drop the strip and go to cheapo syndicate cartoons, or maybe someone desperate enough to do local cartoons “for the exposure.”  So thanks, but my criticism has never been about what transpired between us at The Union.

If you live in a small town, you have to be careful about who you pick fights with. I know, I’ve picked some doozies over the decades. I even wrote a book about a few of them. Some of the people I’ve harpooned are friends today, even a few that were exceptionally bitter. When I joined the online conversation at SFR over five years ago, I was happy to contribute to Scoopy’s forum. It was fun for the most part, but between the nasty remarks aimed at me from some of his pals and the unending diatribes against The Union, I had to drop out. Without any prompting from anyone at the paper, I used my own blog to counter some of his one-sided bullshit.

In a rational world, Scoopy might have let go of his hatred for his former employer and added to the voices searching for truth in our little community, but it’s obvious that his ego can never recover from the slight of being let go. When you look at the other news sources in the western county (Yubanet, KNCO, and even the Scooper) there is a rivalry, but a friendly kind of rivalry. You never see the kind of mean-spirited slurs that Scoopy wallows in. Don’t take my word for it, go read his rants. One of the reasons I’ve continued with my criticism is the support I get from people who agree with me but don’t want to say so publicly.

And as for the whining about me drawing him fat, I have never exaggerated his proportions. If anything, I’ve slimmed him down. If it bothers him that much, he ought to go on a fucking diet or shut up.

With our former supervisor, it’s much the same. Some liberals were mean to him when he was in office way back in the 20th century, and he’s carried a chip on his shoulder as big as an oak tree  ever since. He believes anything that Sean Hannity whispers into his ear, and regurgitates it onto his blog for the benefit of his buddies, most of whom aren’t brave enough to sign their real names. 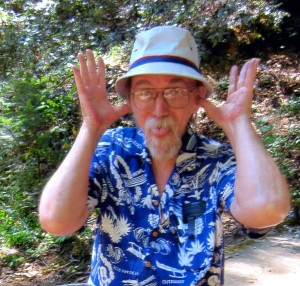 But who am I to complain? I’ve been just as bad as they are, and I’ve wasted altogether too much time and energy pointing out the obvious. Like I said, the last week has been a breath of fresh air, and I kind of enjoyed it. In that spirit, my New Year’s resolution is to delete these assholes from my bookmarks. There are plenty of subjects (or targets, as the case may be) to lampoon, and plenty of stories to tell. I’ll let this photo (at left) be my parting shot at the purveyors of hate. Raspberries, chumps.

It would be nice if the other fellows would follow suit, and maybe see this as an opportunity to start over, but I wouldn’t count on it. Old wounds will never heal when you keep picking at them.

15 Responses to Last Call For Vitriol