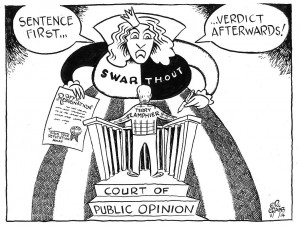 Here’s my take on the situation: Is this how we should conduct elections from now on? An anonymous tipster casually drops a letter bomb the week before the election accusing the candidate of a) child molestation, b) sexual harassment, c) miscellaneous no-no du jour. Without any formal charges being filed, the candidate is forced to nullify an election he or she won fair and square, and the incumbents can appoint the person they wanted on the council in the first place.

Yeah, that’s a great way to run a democracy, don’t you think?

I’m not defending Terry Lamphier. I’m defending the right of the accused to defend his name and the right of the people to hold free and fair elections. If Terry proves to be guilty, so be it. Sorry if it has inconvenienced Lisa and Grass Valley City Hall.

29 Responses to Lisa Vs. Terry, Continued