“I know what you’re thinking, cause right now I’m thinking the same thing. Why, oh why didn’t I take the blue pill?”

That was the question Cypher posed to Neo in “The Matrix” when  the latter became aware that human beings were merely batteries plugged into a big hallucination known as reality. Neo just could have swallowed that blue pill, had his memory deleted, and lived out his life in blissful ignorance. I think most of us would like to take that pill from time to time. Many people already have.

It’s nice to shut off the Big Communal Mouth every once in awhile, just for some quiet time. Perhaps it’s a little easier for me because I’m not on Facebook, I don’t Twitter, and I don’t even have a cell phone. The only thing that separates me from a total neanderthal existance is my email and this blog, and for two and a half days I did without my link to the invisible world of the web, my computer. It was like being in one of those sensory deprivation tanks; at first it is peaceful, but then you start to go crazy from the lack of human contact. We are not programmed for solitude.

So after my forty-eight hour vacation, I plugged back into the cyber-switchboard. Not much had changed. The right wingers and left wingers were still lobbing word bombs at each other across the ether. My old friend Jeff Pelline was bemoaning the state of local politics, and continuing his Ahab-like obsession with The Union and it’s former publisher, Jeff Ackerman. Never mind that JA now resides many leagues away in another state; the temptation to harpoon his old adversary is just too much for the scoopster. It’s an itch he cannot scratch.

It’s tempting to indulge Jeff’s dream of a bucolic community, unsullied by partisan politics and controversy. We’re on our way toward that Stepfordesque end. In Nevada City they don’t even bother with elections anymore. It’s difficult to find enough asses to fill those chairs at city hall, much less to field enough candidates to initiate a contest. 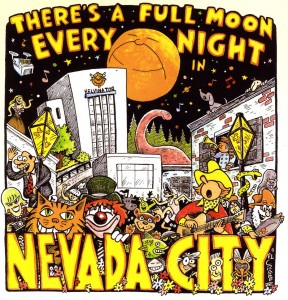 And they are doing such a fine job, there’s really no need for change. Just like there’s no need for any help from the Rotary or anyone else to put a decent trail on the slopes of Sugarloaf. Heck, it might put a grant writer out of work.

Then there’s their ability to bob and weave around the homeless issue, or peer under the boardwalk, or haggle  over new layers of bureaucracy in the planning process. Maybe they could have a bake sale to raise money for the courthouse study. Where’s that grant writer?

Jeff is ready to protect us from gun-toting sheriffs who might veer off into constitutional interpretations of what is law. Too bad he hasn’t noticed our state attorney-general, who makes a mockery of the law on a regular basis when writing language for initiatives on the ballot, or choosing which laws are worthy of her support. It’s pretty bad when even the left-leaning Sac Bee and SF Chronicle call you on your bullshit.

But those big city papers are just trying to gin up interest in their dying publications, just like us hicks up here in the boondocks. We write about things that are divisive, just because they actually happen. We’ll get flack for telling the story, or we’ll get flack for “suppressing” the story. We’ll be chastised for spelling and punctuation. (The other night, someone on the History Channel called our mountain range “the Sierras”. I almost puked.)

Yes, if we just had a community where everyone just got along, life would be so much easier. I could just bow to the inevitable dominance of the Democratic majority and do cartoons mocking Big Oil, rich people, and stupid quotes from Republicans. Get with the program and sign up for as many freebies as I can grab before the well runs dry, which may be sooner than we think unless we get some more snow.

I should make a New Year’s resolution to be more compliant, but it probably wouldn’t last for more than a week. I’ll just end up being more cantankerous and obnoxious than ever. Sorry ’bout that.