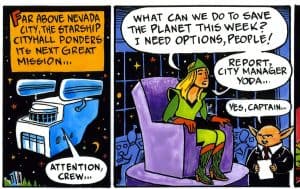 I’ve known Reinette Senum for some years now, mostly after she  was first elected to the Nevada City City Council back in, what was it?…2008? As I have done with every city council person for the last thirty years, she appeared in a few episodes of It Takes A Village Idiot.

She was a good sport about it, although I sometimes got the impression she didn’t really care for my rendition. That’s okay, she’s not alone. She did hire me to do a cartoon of her for her Kickstarter campaign last year, and we both served on The Union editorial board until she left to make a second run for the council earlier this year.

We’re also Facebook friends, but I tended to refrain from commenting very often on the articles she linked to, mostly due to their conspiratorial nature. Sometimes, it’s just better to keep your mouth shut. We all have weird beliefs. She’s a rebel, and I’ve always had a soft spot for rebels even when I don’t agree with them.

But, of course it was pretty much impossible to ignore her post from last week, which has catapulted Reinette and Nevada City into the national spotlight.

Reacting to the murder of five Dallas police officers, and the police shooting deaths of two black men that inspired it, Reinette wrote: This was completely incited by America’s police force. They have obviously been given directives to go out there and kill. It’s insane and it’s meant to create mayhem.

Her post was picked up by The Nevada County Scooper, a satirical website that has been lampooning Senum (although not by her real name) for the past year or so. The more Reinette complained about it, the more posts appeared.

But this post was not satire. Reinette said what she said, even though she apologized the next day.

The fallout has been swift and devastating. Every cop (and their families) within ranting distance has chimed in, condemning her statement. YELP has been deluged with phony reviews of her restaurant, Los Mineros, accusing her of every culinary taboo under the sun.

It’s a reminder how cruel the 21st Century cyber-mob can be, once aroused. Clarence Thomas called it “a high tech lynching.” And never mind all the good a person has done for their community. We all do and say things we regret. My auto-bio, Scablands tells the story of how I had to leave town because of my words and deeds, so yeah, been there, done that.

So now the gathering storm of public opinion is calling for Reinette to resign from the city council.

I’m not a resident of Nevada City, so it’s not for me to decide what she should do. That’s between her and the city she loves. It’s really a matter of what is in Nevada City’s best interest. Since she took the oath of office last week, she is no longer a private citizen. If she persists in making off the wall statements, the criticism will continue, and it will reflect upon the image of the city.

Whatever she decides, I wish her well. It’s not an easy decision to make.

9 Responses to Reinette Under Fire