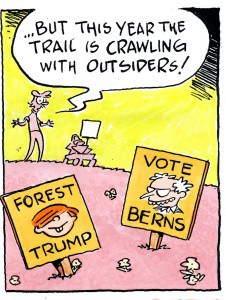 Someone alerted me that Scoopy was hot on my trail this morning, pointing out that I was lampooning Bernie Sanders on the very day of the New Hampshire primary. More proof of my fealty to the Vast Right Wing Conspiracy and “The Tea Party Gazette,” also known as The Union.

This is the maroon who claims that I obsess about him.

The cartoon is the latest installment of my ongoing series covering the 2016 presidential punch-out. Just a few weeks ago, I was doing the same to a character named Trump, a simple man for a simple time.

You see, I believe in telling the story from both sides, the way it is playing out in reality, not just the cherry-picked portions  that suit my agenda. I leave that to hacks like Scoopy.

3 Responses to Scoopy On Patrol