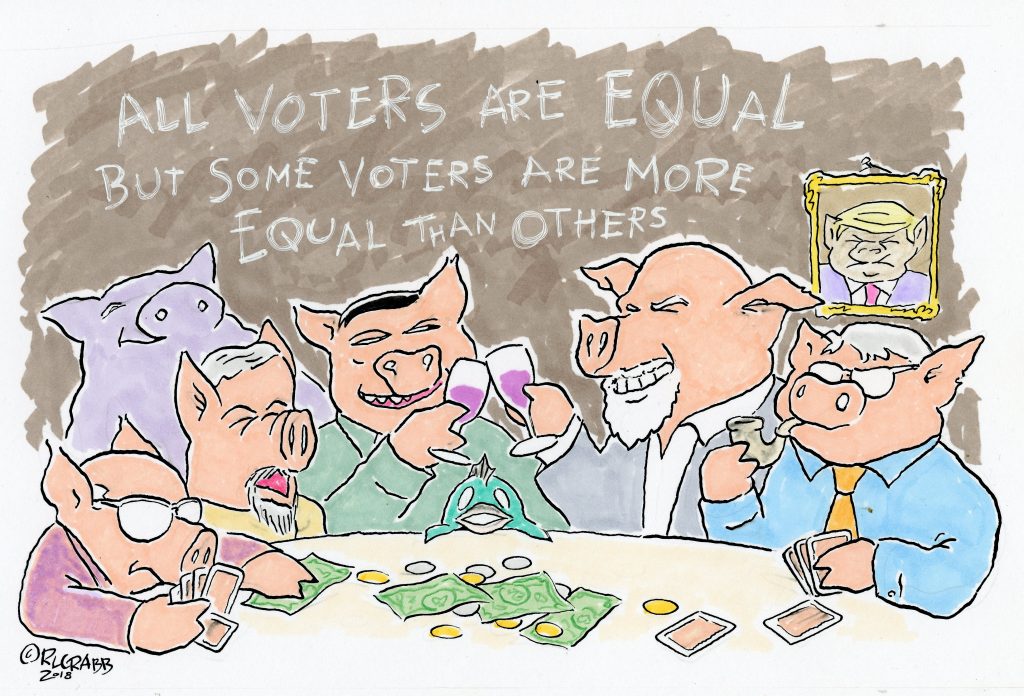 Every week, the members of the Ayn Porkrind Fan Club would meet at Big Gee’s house for a friendly game of cards. It was an opportunity for them to congratulate each other for their superior intellect in person. There was much back-slapping and Big Gee was always generous with his fine wine collection.

They made so much noise, it attracted the other animals. The sheeples, the donkeys, and  others gathered by an open window to listen to the tirades. The club members were so absorbed with their self-adulation they didn’t notice the gathering crowd. Or maybe they just didn’t care.

This week, Big Gee was all in a huff over an editorial he read in the local fishwrap. He especially took offense to the suggestion that everyone should vote!  To him, it was a silly thing to say. Some animals were just not equipped with the required brain cells to take on the responsibility of deciding important policy questions.

The other club members grunted in agreement, then they took turns trading witty put downs of their adversaries. Bossy started it off, declaring, “Po’ ol’ fakey jackass face! Couldn’t find find his ballot ’cause somebody pinned it to his tail!”

Ruse followed with, “I don’t listen to anybody I find annoying.”

Snotty chimed in next, declaring, “It wouldn’t matter if they bothered to engage us in debate, because we already know our shit is better and we tell them so!”

Mr. Unseen was next. “They sure can’t trick us by agreeing with us! We’re too smart for that!”

Turd was last with “Libtards are stupid.”

It was up to Big Gee to bring the conversation back on topic. “Gentlemen, we are experiencing the rejuvenation of our sacred Constitution! Thank the Lard for the Electoral College, with which we shall defeat the flaccid herds of the majority! All across the Heartlands, pig farms are working to cleanse the voter rolls of the inferior and ignorant!”

Snotty added, “Yes, we will return to the time when minorities were barred from voting, unless they owned property and could pass rigorous identification requirements. And you had to be the “right” species,” he said with a nod and a wink.

Big Gee smiled. Things had certainly changed since Big Grump won the presidency. The noisy minority was finally in charge, and now they were working to see that it would be permanent. He looked up at the Grumpy Old Party motto, scrawled on the wall behind him.

The sheeples and the donkeys and the the other minority species looked at the motto, then they looked at the club members, who were now wallowing in their own offal after draining the swamp of that which was there before.

The Elites had been defeated, and now there were new Elites, but it was basically the same old shit.